THE FRWND INVITES YOU FOR A PANEL DISCUSSION OF

Jonathan Hanen from the Federation for American Immigration Reform to discuss the national crisis of illegal immigration, the current status of Congressional legislation on illegal  Immigration and border security, the media firestorm over unlawful entry and family separation a the border, President Trump’s executive orders on asylum policy and the migrant caravans, and the Trump administration’s new framework for securing the border and implementing merit-based legal immigration.  He will review the federal and  Florida state crime statistics for illegal immigrants, the unlawful sanctuary city movement, and the fiscal costs of illegal immigration and refugee resettlement in Florida,  He will also discuss grassroots strategy for advancing bills in Florida that support co-operation between federal immigration authorities and local law enforcement.

Jonathan Hanen is a regional field representative for the Federation for American Immigration Reform a nonprofit, nonpartisan 501(c)3 located in Washington, DC.  He joined FAIR in 2016 with prior experience in political consulting on local and congressional races, as well as nonprofit issue advocacy and freelance journalism.  He develops grassroots activist support and educates the media and the public on immigration issues.

Ana Maria Rodriguez was  elected to be the District 105 Representative in the Florida Representatives in 2018. She is a member of the Business And Professional, Civil Justice, Health Quality, Higher Education Appropriations subcommittees ,  as well as the Public Integrity & Ethics Subcommittee . Prior to being elected to the House,  Ana Maria was the Vice Mayor of Doral.

3  course Meal included and a glass of wine

Divieto Ristorante in Aventura Mall welcomes guests to inside dining

Acts of Kindness for Aventura Police 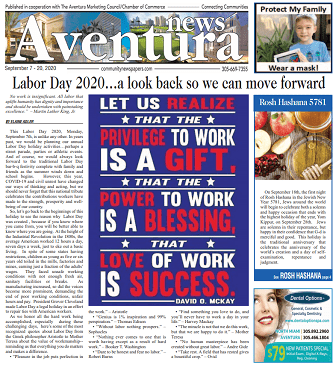