“Robert would not have been a lawyer if not for you!” said Susie Luck, mother of Eleventh Circuit Court of Appeals Judge Robert J. Luck, to Cliff Schulman recently. That brought back a flood of memories to Schulman who was a role model and mentor for a 9-month-old young baby who lived across the street from him. Today, that young “baby” is United States Court of Appeals for the Eleventh Circuit Judge Robert J. Luck, appointed by President Trump this past November along with Circuit Court of Appeals Judge Barbara Lagoa, another former colleague and friend of Schulman’s.

The Aventura Marketing Council/Chamber of Commerce featured Justice Luck as a guest speaker a little over one year ago when he was appointed to the Florida Supreme Court by Governor Ron DeSantis. In September, Cliff and Lauren Schulman flew to Tallahassee for the formal investiture of the newest and youngest, at age 39, Justice of the Florida Supreme Court. Recently, Schulman helped introduce his friend at the meeting and said, “I predict that Robert will not be in Tallahassee very long…he is destined for higher office.”

How right he was! On November 19, 2019, Justice Luck and Justice Lagoa were appointed to the United States Court of Appeals for Eleventh Circuit which has Federal appeals jurisdiction over Florida, Georgia and Alabama, and is just one step below the Supreme Court of the United States.

“Both Justices were my colleagues at Greenberg Traurig, and both got through the Senate Judiciary Committee and the full Senate with flying colors!” said Schulman. “I’m looking forward to attending Robert’s future investiture in D. C. when he’s eventually appointed to the United States Supreme Court. I’m so very proud of him…but it sure makes me feel old!” 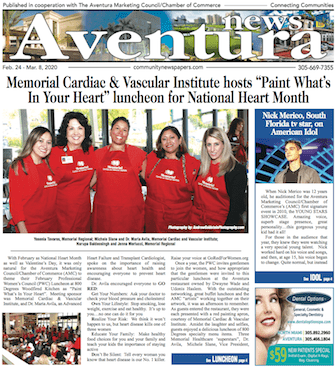 Kendall Yamberli Cruz and Terri Vega - February 25, 2020
I am the most powerful thing you do. I am part of your daily life and I control your future. I am effortless as...

South Miami Gloria Burns - February 25, 2020
More than 500 people runners as well as many alumni gathered at Barry University on February 15 for a beautiful morning race and festival....