AMC Chair Cliff Schulman of Weiss Serota Helfman, past Chair Bob Hollander of Brown & Brown Insurance and Lazega, founder of the law firm Florida Advocates and author of over a dozen books, welcomed a talented cast of business and community leaders gathered at Christine Lee’s at Gulfstream Park.

The meeting’s first act starred Lazega, who put on a great show while reading excerpts from “Managing Bubbie”- bringing his beloved but “impossible” grandmother Lea Lezega’s spirited, stubborn character to life via a hilarious dramatic interpretation (complete with Yiddish accent).

“Managing Bubbie was like working a puppet with a thousand strings and sometimes I wonder which of us was tugging them,” Lazega said.

Taking center stage, Shanley explained, “The Broward Center, one of the top 10 busiest theaters of its size in the country, has had a significant impact on building community through the arts, presenting more than 700 events to more than 700,000 visitors annually. We’ve also touched the lives of nearly three million students through our school partnerships.

“Today, the Aventura Arts & Cultural Center (managed by the Broward Center) is also considered an outside resource classroom for schools including the city’s charter school (ACES) located next door. The educational programs introducing students to the arts are tied to classroom curriculum so we’re using art as a means to reinforce and enhance academic achievement.”

Shanley went on to speak about the Broward Center’s multi-million renovations focusing on modernization and enhancing the audience experience with amenities including a Club Level, full bar, food and beverage venues and valet parking. The Rose Miniaci Arts Education Center and JM Family Studio Theater are also now facilitating additional space for educational programs, classes, performances and workshops for students of all ages learning to express themselves through the arts.

“We’re proud to say that as we turn 25, the Broward Center is bigger, better, and more vibrant than ever,” Shanley said. “We hope you’ll join us for our most exciting season yet!”

For more information about the all-star 2015-1016 lineup at the Broward Center for the Performing Arts and Aventura Arts & Cultural Center, visit browardcenter.org and aventuracenter.org.

To laugh, cry and commiserate with the trials and tribulations of Managing Bubbie, order your copy today at Amazon.com.

AC Hotel and FPL host holiday Breakfast Meeting with a cause 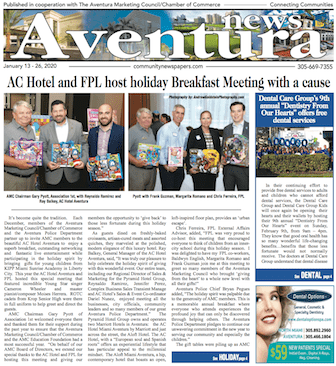