Bentley Miami on Tuesday, Mar. 9, planted two vehicles, a 2021 Bentley Continental GT and Flying Spur, at Vizcaya Museum and Gardens at the coral rock gated entrance to the historic gardens in a show of support for the museum’s preservation efforts of the historic James Deering estate.

Bentley Miami, one of the nation’s top performing Bentley dealerships, sponsored the socially distanced Vizcaya Preservation Luncheon, known in society circles as the “hat luncheon.” The fashionable annual affair is one of the museum’s primary fundraisers.

The luncheon took place in the magnificent gardens beneath a canopy of trees and amid a picturesque backdrop of perfectly manicured shrubs, centuries old statues and bubbling fountains. The champagne flowed freely as more than 100 of Miami’s most stylish women donned colorful hats and dined on a delicious assortment of appetizers, light salads and fresh pan-seared Branzino by Thierry’s.

“Bentley Miami, a Braman Motors Corporation, is proud to have supported this Miami landmark,” said Mike Rodriguez, general manager of Braman Miami. “Vizcaya is a crown jewel of Miami’s cultural community and a destination for tourists from around the world. It was our privilege to support this important museum during one of its most challenging years.”

The co-chairs of the 2021 Vizcaya Preservation Luncheon were Eilah Campbell-Beavers, Swanee DiMare and Christy Martin. Guests were treated to a special performance by opera singer and composer Radmila Lolly. Proceeds from the luncheon benefit Vizcaya’s COVID Recovery Fund. Neiman Marcus of Coral Gables served as the fashion sponsor and Shaw Ross was the luncheon’s beverage sponsor.

A collection of car dealerships spanning Biscayne Boulevard in downtown Miami, Braman Miami was founded in 1975 by businessman Norman Braman with a single Cadillac dealership. Today, the dealership sells and services new and pre-owned BMWs, Bentleys, Rolls-Royces, Bugattis, Cadillacs, Minis, Hyundais, and Genesis, as well as an array of other certified pre-owned vehicles and pre-owned exotics, consistently ranking among the top dealers in the United States.

The company has a long history of supporting its local community, enjoying a proud legacy of supporting various nonprofits and important causes that encompass the realms of art, health and education.

For more information about Braman visit www.bramanmiami.com or call 305-720-2548. 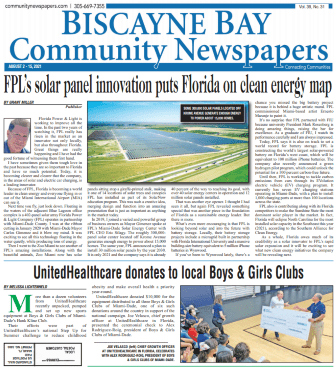