I have been listening to commentators and health care experts who offer various and sundry models of how the coronavirus spread from Wuhan to the rest of the world.

No one disputes the following:

1. The virus originated in Wuhan, China as early as last December; measures were taken by Chinese authorities beginning on or about January 23, 2020.

2. The measures taken by China included, as a keystone feature, prohibiting all travel in and out of Wuhan.

3. The exception to the above prohibition was travel to countries outside of China; whether this was intentional, as the conspiracy theorists argue, or negligent, as I am wont to believe, is irrelevant to the analysis. I have heard figures in the neighborhood of 500,000 Chinese traveling from January 23, 2020 to the United States alone, until all travel was stopped by presidential order, in late February.

4. China obviously took great steps in prohibiting travel from Wuhan to Hong Kong. This particular fact is worth elaborating with some quantitative analysis.

Here are some figures to illustrate the impact of the viral chaos that China has inflicted on the world:

Despite being next to China and its financial center, Hong Kong was almost spared the virus altogether. With a population of 7.5 million, there have only been about 1,000 confirmed case of COVID-19 in Hong Kong; only four have died. New York City, with a population of 8 million people, has suffered about 11,708 fatalities.

China itself, with a population that exceeds a billion people, claims to have controlled the virus in a month, ending up with a little over 4,000 fatalities.

Besides being the origin of the deadly virus, and controlling intra-country travel while allowing it to the rest of the world, China clearly did something that free nations cannot do.

What is that, you ask?

I’ll tell you what they did: what communist countries do. Each and every person who came into contact with the initial laboratory employees where the virus spread from a bat to a human was not just quarantined in their homes. They were isolated from the world entirely – either at home, if they showed no symptoms, or in an infectious-disease facility if they were ill.

It’s easy to stop the spread of a killer virus if you create it, restrict its spread within your own country, and send it out with a half million citizens to decimate the rest of the world.

And the economic consequences? Well, the world’s free nations have suffered a devastating loss in their gross domestic product, estimated at somewhere between ten percent and twenty percent for the upcoming quarter.

For China the news is much better: They have sold us test kits and protective equipment valued at hundreds of millions of dollars. Their state-run company, Shuanghui International Holdings, that has just experienced an outbreak at one of its facilities (that reduced its production by about half) had previously bought America’s largest ham-producing company (Smithfield) for a cool five billion dollars.

Look to China to recover quickly from the pandemic which they caused, continue using their trade surplus dollars (over a trillion dollars in US treasuries at last count) and continue their imperialistic conquests in the South China Sea and elsewhere.

Miami-Dade County Commissioner Xavier L. Suarez can be reached at 305-669-4003 or via email at district7@miamidade.gov. 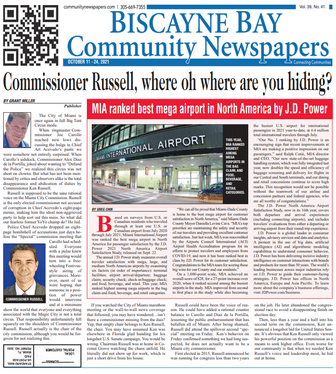