To celebrate the countdown to Super Bowl LIV, the Miami Super Bowl Host Committee (MSBHC) offers an overview about Super Bowl LIVE presented by Verizon, the free-to-the-public weeklong fan festival which will showcase Miami’s vibrant culture and music scene, which is taking over all of Bayfront Park during Super Bowl week.

“Super Bowl LIVE will completely transform Downtown Miami,” said Rodney Barreto, MSBHC chair. “Our team has worked hard to bring the game to everyone and create a memorable, fun and interactive Super Bowl experience for visitors and residents alike.”

Super Bowl LIVE presented by Verizon will be running from Jan. 25 to Feb, 1. The fan festival will feature evening concerts at the Amphitheater, a Huddle Down Community Stage, Road to the 11th Super Bowl activation, Tailgate Town featuring a Culinary stage, an Environmental Village, live water shows, evening parades, fireworks and much more.

This will be the first time that visitors and the community at large will have the opportunity to celebrate all things Super Bowl at a free-to-the-public event in Downtown Miami.

In addition to Super Bowl LIVE presented by Verizon, fans will be able to kick off the biggest week of the year at Super Bowl Opening Night, Jan. 27, 7 p.m., at Marlins Park and continue to celebrate the culmination of the NFL’s 100th season at Super Bowl Experience at the Miami Beach Convention Center. Super Bowl Experience will open on Jan. 25, featuring interactive games, autograph sessions and more. For more information and tickets, visit www.nfl.com/super-bowl/event-info.

Culminating the star-studded lineup for the Evening Concerts at the Amphitheater, taking place Jan. 31 with JPerry, Walshy’s Fire Miami Orchestra and Nu Deco Ensemble and Feb. 1 with Domino Saints will be the world renowned, multi-platinum selling band Fitz and the Tantrums. After HandClap — the breakout hit song of Fitz and the Tantrums’ career — became something of an unofficial theme song for the NFL, the band was invited to participate in FOX’s Super Bowl preshow, along with previous memorable performances at Dick Clark’s New Year’s Rockin’ Eve and the Macy’s Thanksgiving Day Parade. Audiences will also be able to enjoy songs from premier artists in a variety of music genres.

The Huddle Down Community Stage will feature bands, specialty musicians, dance teams, and visual arts performances providing an opportunity for local artists, schools and youth performers to showcase their talent as well as the culture and diversity of our South Florida community. It will encompass a unique display of talent each day.

The Road to the 11th will feature a regulation size football field as a grand entryway into Super Bowl LIVE presented by Verizon detailing the rich the history of the past 10 Super Bowls hosted in Miami. A phenomenal opportunity for fans to be able to photograph themselves with larger-than-life footballs portraying the teams and final scores for each of the games.

Tailgate Town featuring the Culinary Stage will take you through the sounds and smells of a true tailgate. Tailgate Town will be an epic pre-game party featuring celebrity chefs, tailgating concessions, decorative seating, and games in a family friendly area.

Super Bowl LIVE presented by Verizon guests will have the opportunity to experience the senses of Miami’s cuisine and culture at the Miami Super Bowl Host Committee Culinary Stage. The stage will feature live cooking exhibits and demonstrations from world-renowned chefs and celebrity guests from the NFL community working together on interactive fan activities. The Culinary Stage will be programmed daily except for Monday and Tuesday with three or four culinary demos each day. Other entertainment will be programmed in between and announced closer to the event.

Fans are sure to enjoy a spectacular display of water stunts at the Super Bowl LIVE Water Show. Super Bowl LIVE presented by Verizon will feature a personal watercraft stunt and freestyle show with a wild array of aerial tricks and dizzying backflips of jet skis, flyboards and water jetpacks.

Stunts will include jetpack performers completing tricks up to 70 feet in the air and jet skis hitting amazing tricks, flips and spins up to 15ft high.The experience is led by two-time nationally ranked pro freestyler, Chris Anyzeski, currently first place in the United States and second in the world. Members of this demonstration team have performed all over the world, including China, Australia, Japan, Dubai, France, and South America. Super Bowl LIVE will host the shows on Thursday, Friday and Saturday in beautiful Biscayne Bay.

Next up is a showcase for the Miami Super Bowl Host Committee’s environmental initiative — Ocean to Everglades in the Environmental Village. It will be defined by incorporating elements related our surrounding oceans and the Everglades. The showcase will include environmental sponsor activations from the MSBHC’s environmental partners.

The Super Bowl LIVE Evening Parades will feature over 100 performers on Friday and Saturday night full of the rhythmic culture Miami has to offer. Miami’s Caribbean Carnival will feature Junkanoos and stunning oversized costumes from our Caribbean community alongside the incredible sounds of Socca beats and Steel Drums. Miami’s Latin Parade will feature Brazilian Samba Dancers & Rhythm Beaters “Batucada,” the acrobatic dance of Capoeira and the incredible costumes of Cuba, Colombia, Venezuela and Argentina.

To close out the night, following the parade and concerts on Friday and Saturday nights, Biscayne Bay will light up in a spectacular Fireworks Show illuminating the sky over Super Bowl LIVE presented by Verizon.

On Feb. 2, South Florida will host its record-breaking 11th game at the newly renovated Hard Rock Stadium. Additionally, Super Bowl LIV will mark the culmination of the 100th season anniversary of the NFL and will feature special events and activities throughout Miami-Dade, Broward and Palm Beach counties as part of the festivities.
For more information, visit www.MIASBLIV.com. 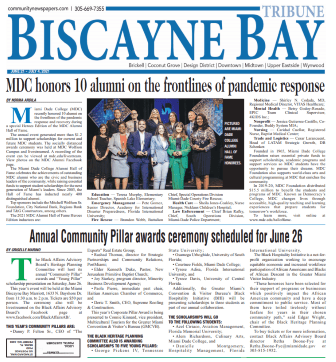