Miami Dade College Foundation has broken campaign records for a fourth consecutive year with an unprecedented $2 million and counting, raised by South Florida for students.

To commemorate the college’s 59th anniversary on Sept. 6, I AM MDC Day received support from over a thousand people and set records for most dollars raised, highest number of sponsors and largest grassroots effort to mobilize MDC alumni at local organizations — a tremendous achievement for a community college.

I AM MDC Day celebrates the community-building power of MDC and over 2 million lives changed since first opening its doors on Sept. 6, 1960. All dollars raised for the giving day campaign benefit scholarships and programs at the college.

“Our campaign is a testament to the impact of this college on the lives of so many students. Over a thousand people across our community contributed over $2 million this year, an unprecedented feat for community colleges and rivaling some university efforts,” said Al Salas, vice chair of Miami Dade College Foundation Board of Directors. “Surely, every dollar is needed to sustain MDC’s excellence and meet the challenges of an evolving world and workforce. And all this was accomplished during a leadership transition and as Hurricane Dorian threatened.”

I AM MDC Day began with Miami Mayor Francis Suarez, city manager Dr. Emilio T. Gonzalez and City Commissioner Willy Gort who presented 50 new scholarships as part of the city’s I AM MDC Day gift of $50,000. The new scholarship fund honored president emeritus Dr. Eduardo J. Padrón for his outstanding service and leadership during his 50-year tenure at the college.

“Next year, I will be the first in my family to graduate from college. MDC is absolutely changing my future,” said Carolina Romero, one of the 50 recipients of the Eduardo J. Padrón Completion Scholarship. “As a wife and a mother, balancing school and caring for my family is not easy. Because of MDC and this scholarship, I am grateful because I already see a brighter future.”

As part of the campaign, MDC Foundation helped raise funds to benefit students from the Bahamas affected by Hurricane Dorian to ensure they can continue their education. 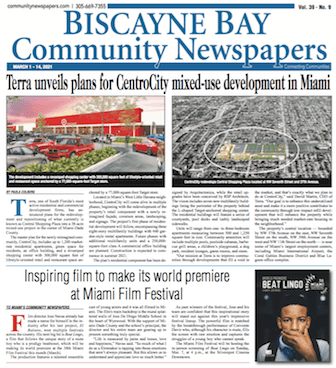 Aventura Featured Community News Releases - March 8, 2021
Alone we can do so little; together we can do so much…Hellen Keller March is Women’s History Month, and the Power of the Heels Foundation...

Aventura Featured Community News Releases - March 8, 2021
Amy Rosen has been named Executive Sales Director for Vi at Aventura. A sales and marketing leader in the senior living industry with more...

Power of the Heels Foundation features women who “dare to go...