I couldn’t help but remember my AP English Teacher’s take on the Rime of the Ancient Mariner as I listen to Legislative Committee meetings this week.  Samuel Coleridge’s lyrical ballad, considered by many to be the transition to modern poetry specifically British Romantic literature, is an enchanting tale about a mariner whose good fortune turns to bad and while he survives the trials and tribulations of the voyage, returns home, like all heroes, “a sadder and a wiser man.”

Growing up in Florida, surrounded by water and aware of our dependence on it and our simultaneous need to contain it, every Floridan irrespective of political affiliation is a Water Worrier.  After all, water quality, access to clean water and water containment have been non-partisan quality of life issues since Florida became the 27th State of the Union

Sadly, in the past decade environmental issues including water quality have been polarized for political gain by both Republicans and Democrats in Florida, but thankfully this legislative session appears to be turning the tide back to when we were all on the same page regarding our collective obligations to future generations and the impact that our environment has on our collective and individual survival.  For those that remember this discourse a decade or two ago, before it became red and blue, Floridians have historically agreed on the outcomes, clean water, resiliency, sustainability and diverged on the why these things were important, some believe they have value in and of themselves while others point to the impact that these issues have on tourism and therefore our economy.  But as one of my favorite authors, Dr. Seuss, taught us “sometimes the questions are complicated, but the answers are simple.”

In the case of environmental protection and water quality in Florida we need to stop taking the political bait on the why it’s important and who says it’s important and get to the business of outcomes.  We need to set aside “the debate” and recognize that when we stop debating the time/magnitude we all agree that outcomes like flood mitigation, coastal resiliency, beach re-nourishment, responsible wastewater treatment, heightened water quality standards and coral reef protection are good and algae blooms, dead fish, red tide, being consumed by the ocean that surrounds us and having our aquafer contaminated by salt water intrusion and/or sewage/wastewater is bad.

This week Florida took a step in the right direction when SB 78, which mandates that any coastal construction project that receives state funds conduct a sea level impact protection study, made it out of committee unanimously with bi-partisan support. But the top bill to follow this upcoming week is SB 1758, which goes to its first committee and takes on much needed septic to sewer conversions and much more.

In the days that follow and as we lead up to 2020, lets hope that our elected officials remember the ancient mariner and realize that if they continue to politized environmental issues that unite Floridians, they are shooting the albatross and Floridians will eventually hang it around their necks as penance for choosing partisan politics over the best interests of Florida’s future.

Raquel Regalado is an attorney and a former Miami-Dade County School Board Member. 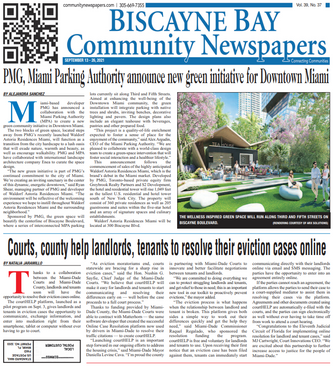