Contrary to a recent piece in The Miami Herald which incorrectly positioned Coral Gables development as rampant, I believe the city is getting it right.

Closely following the strict guidelines laid out by city founder George Merrick nearly 100 years ago, the current commission essentially has focused on a two-step plan: encourage and attract top-tier commercial development in its downtown corridor, and strictly limit any development whatsoever in the vast residential neighborhoods which continue to be among South Florida’s most quaint.

This responsible approach has led to excellent dining and entertainment options for residents and visitors alike, while keeping taxes among the lowest in all of Miami-Dade County. In fact, some estimates place Coral Gables as having the seventh lowest tax rate of all 34 municipalities in Miami-Dade County, while maintaining some of the fastest-emergency response times, top-ranked police and fire, impeccable trash pickup, and more. Furthermore, they have increased focus on city beautification and public arts projects, including the wildly popular Umbrella Sky project.

Without smart development, none of this would be possible.

Furthermore, it seems odd for anti-development people to place “blame” at the feet of current city leadership, when many of the most controversial projects that have faced opposition were voted on and approved before the current administration. Paseo de la Riviera was approved in 2015, The Plaza (formerly known as Mediterranean Village) in the same year, and Gables Station in 2016. These were all voted upon by the previous commission (including former Commissioner Jeanette Slesnick) and prior to the current administration of Mayor Raul Valdes-Fauli (who was elected in April 2017).

By all accounts the current mayor and this commission seem to be in favor of sensible development, but who knows how they might have voted on these previous projects, or what nuanced direction they would have given?

We shouldn’t lay the blame of past votes on current elected officials, nor use cheap attacks to win political points.

The city appears in the hands of reasoned leadership, and no reporter (or politician) should paint with a broad brush to characterize all development as bad. In order for the City Beautiful to remain as such, it must adapt to the times. Sometimes, the only way to stay the same, is to change. 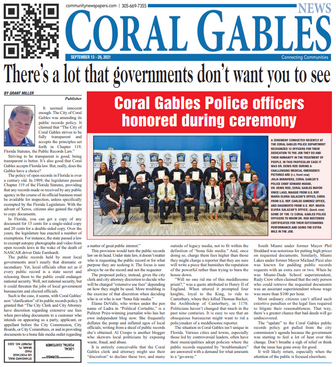