Cutler Bay Middle School’s Coast Academy Parent Association honors incoming President Javier Giraud for being its founding corporate sponsor.  The Law Offices of Javier Giraud made a generous $1,000 donation to the COAST program.  Mr. Giraud acknowledged that he has a large task ahead of him in filling outgoing President and Cutler Bay Town Councilman’s Michael Callahan’s shoes.

Mr. Giraud’s goal as incoming President is to raise sufficient funds to assure that all of Cutler Bay Middle School’s COAST students can continue participating in monthly educational field trips to venues such as Deering Estates, where students learn hands on about the wildlife in Biscayne Bay and surrounding wetlands.  Mr. Giraud stated that Deering Estates and the Town of Cutler Bay continue to be an invaluable partner of Cutler Bay Middle School’s COAST program.

This program would not be as successful without the partners like Deering Bay and the Town of Cutler Bay’s leadership. 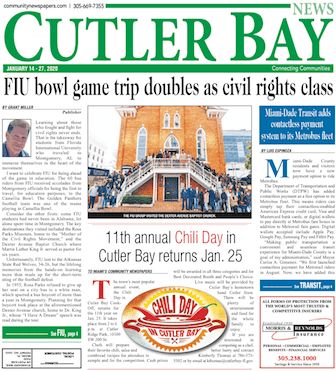