Dade County Federal Credit Union has a history of embracing and assisting children’s organizations, and its young professional group, called the Gen-You Committee, recently helped a new kid’s charity that is working to raise awareness and create programming for children with developmental disabilities. The credit union hosted a back-to-school backpack giveaway at its Homestead branch for Aria’s Planet.

Aria Ellison, a 6-year-old student at Gulfstream Elementary in Cutler Bay, suffers from a medical condition so rare that it wasn’t even discovered when she was born. Originally diagnosed with cerebral palsy, Aria in fact has a gene mutation known as DDX3X, which causes developmental and intellectual delays. Seeing her child suffer from a developmental disability brought many challenges to Aria’s mother Alicia Ellison, but she chose to meet adversity head-on and also help others by creating a charity. Aria’s Planet supports special needs children and their families.

Alicia, a business analyst at Assurant in South Dade, lived through what all parents fear the most when she first learned of Aria’s disability. Worse, she would only later learn the details. DDX3X was only discovered in 2014, two years after Aria’s birth. It is caused by a spontaneous gene mutation at conception, and nothing either parent did caused the child’s condition. It has only been identified in about 200 individuals, but doctors believe it is the cause of one to three percent of all intellectual disabilities in females. DDX3X is linked to intellectual disabilities, seizures, autism, low muscle tone, abnormalities of the brain, and slower physical developments. It primarily affects girls.

Aria’s Planet hosts quarterly events for children with developmental issues and their families. According to Alicia, they have held events involving music therapy, face painting, and art therapy as well as providing food for the families and siblings. Earlier this year, Aria’s Planet hosted a fun day at Palmetto Bay park with activities and a bounce house.

But music holds a special place for the charity and its namesake.

“Aria lights up when she hears music,” says Alicia. “I noticed from a young age that she reacted wonderfully to music and movement. It’s a magical coincidence that her name is synonymous with music and song.”

Alicia created a 501(c)(3) charitable organization for Aria’s Planet and it accepts donations and needs volunteers. Baptist Health System and Assurant have already offered support. Aside from the regular events, Alicia hopes to one day have a permanent location to offer fine art therapy, music, dance and movement therapy while serving as a place for children and families to meet and make friends.

“Parents lose themselves when caring for a child with special needs,” said Alicia. “It’s a lot of work, and we want to give them a break.”

Dade County Federal’s Gen-You Committee hosted the event, offering food and drinks, a savings coloring book, and a chance to spin a prize wheel. Aria’s Planet gave away 85 book bags with paper, crayons, glue and hand sanitizer, among other back-to-school necessities. The credit union holds multiple events for students each year and recently began a partnership with the Miami Dolphins to provide financial literacy events in conjunction with the team. Dade County Federal is the preferred credit union of the Miami Dolphins.

At the backpack giveaway, hits from the 70s roared from the speakers and Alicia picked-up Aria and danced in place with the six-year-old on her hip. Next was a smile as wide as one could imagine. 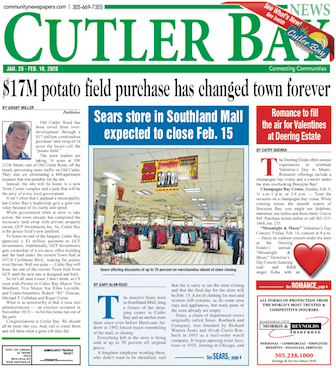