For women, social networks come easily. Women may have their knitting and quilting groups, their book clubs and Red Hat Societies. But often men are left to fend for themselves when it comes to seeking friendships.

As they age and their circle of friends becomes smaller, it is more common for men to suffer from isolation and depression. Men’s Groups are answering this need.

At East Ridge at Cutler Bay, a senior lifestyle community, a Men’s Group brings the guys together on a monthly basis. Organized by longtime East Ridge resident Bob Sims, the group usually attracts eight to 10 regulars but sometimes swells to 15. The guys get together on the second Wednesday of every month at 8:30 a.m. for breakfast.

While not a secret society, the women at East Ridge seem to accept that this activity is exclusively for the men.

“It’s informal without a planned speaker or program,” Sims explained. “We socialize, tell jokes and often talk about our wartime experiences. One of our members was a great storyteller. He could captivate us with his stories of World War II. Although he’s passed, his stories live on. We discuss and debate current issues and news events while trying not to complain too much.”

Gerontologists find these types of support groups help people in a variety of situations at any age. However men’s groups are few and far between, even at senior living communities. When men retire it’s almost like they become invisible. The men they used to see at work fall by the wayside.

“Men tend to have friends from physical activities,” explained Dr. Carolyn Garwood, a retired psychologist and an East Ridge resident. “Social groups don’t come naturally to men. Support groups help them. A breakfast format is ideal. They can get together early in the morning and greet the day and each other.”

A men’s group offers a natural framework for men to grow a new social circle.

“A group helps them recover lost selfesteem, alleviate depression and enable a sense of comraderie. It provides, literally a new ‘Old Boy’s’ network much like the one they left behind. Support is so important as we age. By getting together and talking, men can better understand the aging process that is happening to everyone. They may be able to admit they simply can’t use a screwdriver like they use too and laugh about it. That’s the social part but the support side is knowing you aren’t in the alone,” she added. 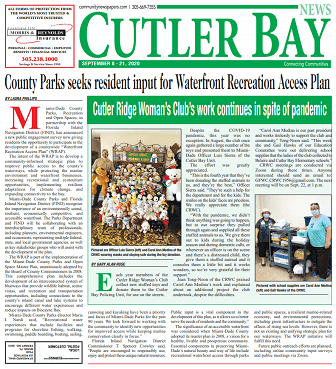