Local Celebrity Chef Chris Valdes is teaming up with community partners Sloan’s Ice Cream in Doral and the Woman’s Club of Coral Gables to bring smiles to the kids at Chapman Partnership with a “sweet” afternoon of holiday treats, Dec. 12, 2 to 4:30 pm., at the north center of Chapman Partnership located at 1550 North Miami Ave., Miami.

The afternoon features lots of fun activities for the kids, ice cream, and toys collected by Chef Chris, Sloan’s, and the CGWC, as well as a special appearance by Santa Claus (Chef Chris).

“We are humbled by the generosity of Chef Chris Valdes, Sloan’s Ice Cream Doral, and the Woman’s Club of Coral Gables whose support will help us brighten the holidays for the children at Chapman Partnership’s north center,” said Chapman Partnership’s VP of Development and Marketing Flavia Llizo.

“The support and dedication of community partners and volunteers, like Chef Chris, is key to having our residents experience the joys of the holiday season as they work toward self-sufficiency,” Llizo continued.

Chef Chris, a native Miamian and a finalist on this season’s Food Network Star has made an impact in the local community by supporting many philanthropic causes, including the American Liver Foundation and Chapman Partnership since he was 16 years old.

This year, he also visited Puerto Rico after Hurricane Irma to aid in the disaster relief effort by bringing toys to the children at area hospitals.

“Giving back to the community is very important to me and what I do”, says Chef Chris. “There’s a special feeling, an inner fulfillment, when you do good and give back. Simply priceless. Giving helps you maintain a humble state of mind. We should share with others.”

Chef Chris has been honored for his community involvement. He was recently chosen as Principal for the Day for his High School Felix Varela as part of the MDCPS Principal TODAY program. He was also selected to give the keynote speech to students entering Miami Dade College’s Culinary Institute. He has participated in many local festivals as a featured chef – in this year’s South Beach Food & Wine Festival and most recently at the Doral Food and Wine Festival. Chef Chris was the only chef from Miami invited to Puerto Rico’s “Saborea” – the Caribbean’s largest food festival.

Solar Tax Credits will be Running out after New Year 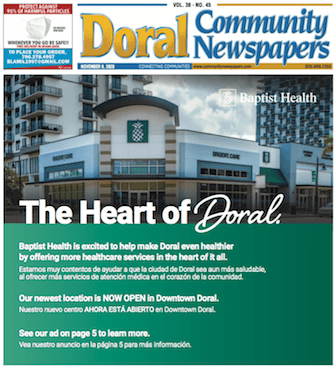