Miami Christian School recently graduated a class of 48 seniors, of whom 80 percent will receive more than $6 million in scholarships for their four years in college. This group of grads were accepted into 43 different colleges and universities – and 14 of those institutions were ranked in the top 100 in the U.S. – putting them in the top 1.89 percent of colleges in the nation.

Additionally, 13 of those colleges were in the top 50 of their region, six were in the top one-third of Florida schools, and one was the #7 ranked school in Canada. Kudos to that impressive class of 2019.

Speaking of impressive graduates, Sonali Khiyani (class of 2015) just completed her bachelor’s degree at the University of Miami.

Sonali graduated with a double major in Biological Sciences & Economics and a double minor in Chemistry & Public Health.

While at UM, Khiyani (worked at UM as a research scientist, and also at Sylvester Comprehensive Cancer Center. On campus, she was involved in Alpha Epsilon Delta, Random Acts of Kindness, Scientifica Magazine, and in student government as the Campus Liaison Council for Parking and Transportation. She now plans to concentrate on the MCAT and to enter medical school.

Vicente Chavarria (class of 2005) pursued his bachelor’s and master’s degrees at the University of Miami, before moving to the University of Southern to pursue his doctorate in Choral Conducting. From there he moved to Leuven, Belgium, and worked at the Katholieke Universiteit Leuven.

Yet another alumna, Zuly Inirio, Class of 2003, has been invited by the Mythos Opera Festival in Sicily, Italy to sing the role of the High Priestess and to cover Aida in their upcoming production of “Aida.” After graduating from Miami Christian, she got her degree in Vocal Performance from the University of Florida, and then moved on to LSU in Baton Rouge to acquire both her master’s and doctorate of Musical Arts under the tutelage of Robert Grayson and Patricia O’Neill respectively.

Inirio’s ability to sing in English, French, Spanish and Italian, has allowed her to travel and sing throughout the US and Europe. She currently resides in Munich, Germany.

On the home front, the Home Economics class completed a “Disaster Preparedness” section, studying the various natural disasters that students could find themselves in depending on the differing geographical sections of the country (blizzards, hurricanes, tornadoes, etc.).

The study included learning alternate cooking methods if there is no electricity, creating a family emergency plan and making mini versions of disaster emergency supply kits. They also created “solar ovens” and cooked food on them. With hurricane season starting, this was a timely area of study. 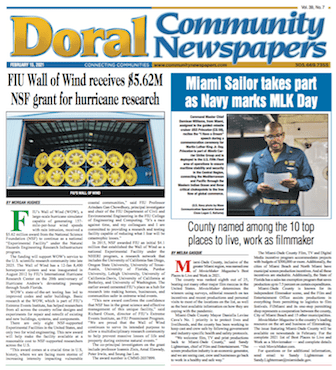