I’ve known Rene Garcia for many years and he has always impressed me as a solid, connected leader with innovative ideas.

Rene is running for County Commission District 13, which includes Hialeah and is the seat Esteban “Steve” Bovo is exiting. He is a child of Cuban immigrant parents and a lifelong resident of Hialeah.

Already Rene has diagnosed a big problem in Miami-Dade County – housing that is affordable for the poor and the middle class.

It’s a big priority for Rene, who is a former Florida State Senator representing District 36. He was also a Hialeah City Councilman prior to become a mainstay in Tallahassee.

He wants to alleviate the tax burden for seniors by freezing property taxes, which have lived in their homes for at least three decades.

With schools scheduled to reopen soon, Rene has put his political might behind the idea that parents should have a choice about sending their kids back to the classroom. It is in line with what he calls a “thoughtful and balanced” approach to reopening from the School Superintendent’s office.

“Collaboration with parents, medical professionals, businesses and local government is critical to the development of a responsible, data-driven approach that provides parental choice and is flexible and nimble enough to withstand the evolution and the possible continued spread of the virus,” he wrote recently in Community News.

Quarry blasting on the western edges of Northwest Miami-Dade is a big deal to lots of people and it’s an issue that Rene has focused his attention while a state senator. This is important because there’s a lot of development happening and coming to the area, with residents complaining for years that blasting damages their pools, houses and foundations.

In the past, Rene has sought to allow communities to seek money from the quarries to address legitimate claims of damage to property. He has even advocated taxing quarries to generate funds to make the repairs.

I like this guy. He makes me believe that he will do everything in his power to help the people of his district.

He’s got my endorsement. Vote for Rene Garcia for District 13 in Miami-Dade County. 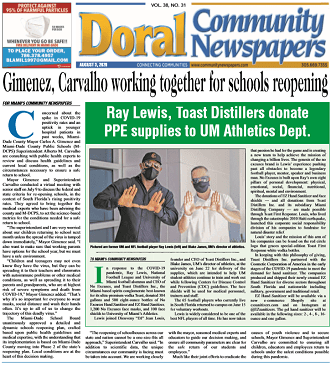