Actors’ Playhouse opening night provided loyal theatre goers with a delicious pre show buffet courtesy of Catering by Lovables and a laugh riot of a show, Murder for Two. This musical comedy directed by David Arisco was performed brilliantly by a cast of two: Martin Landry, who played the parts of numerous characters, and Mark Schenfisch, both of whom are also concert pianists among their many talents. This show will run through August 11. For info and tickets, visit www.actorsplayhouse.org.

Actors’ Playhouse begins the 2019-20 season on October 30th with Johnny Cash’s Ring of Fire followed by so many great shows on the mainstage including Mama Mia!, Camelot, Murder of the Orient Express and Fuacata! For young people and adults interested in acting, film and musical theatre, check out Actors’ Playhouse Theatre Conservatory for classes. To register or get more information, call 305 444-9293 X 606.

South Miami Rotarians held their first social of the new club year at South Miami’s Pub 52 on July 16. The following night they joined other clubs for preview night at Actors’ Playhouse musical comedy Murder for Two and then participated in the Palms Crawl on July 24 to support Miami-Kendall Rotarians project to send backpacks/ school supplies to 1,000 children in Jamiaca. At the Crawl, folks gathered to register at Devon Seafood & Steak where the Crawl began enjoying drinks and bites and moving on to party at Bar Louie, Cadillac Ranch, Pisco y Nazca, Outback Steakhouse, Sweet Tomatoes, MOD Pizza and Blue Martini.

By the way, South Miami Rotary has recently moved its meetings! The club now has their lunch meetings at the South Miami Elks Lodge, 6304 SW 78th Ave. on the 1st,2nd and 4th Tuesday of each month. Visiting Rotarians are always welcomed.

In other fund raising news, Clutch Burger (248 Giralda Avenue) and the GFWC Coral Gables Woman’s Club are partnering again with their monthly Gringo Bingo party on August 6, 7 – 9 p.m. This time the event will benefit A Safe Haven for Newborns.

Limited to only 40 guests, this monthly event generously hosted by Clutch Burger’s Steven and Ana Bradley with music donated by DJ Germain, sells out every time. Since the event began in April, the Coral Gables Woman’s Club has raised more than $7,000 various charities including Coral Gables Rotary’s monthly bingo games at the VA Hospital, Rotary’s/ Ecoworks Goat Project in Haiti, Gilded Lilies/Easterseals and the Coral Gables Children Dental Clinic. CGWC President Arely Ruiz applauds our own Community Newspapers for its help with design work and media sponsorship. For ticket information and/or purchase, call 305 968-3090 or email Gloria@cnews.net. 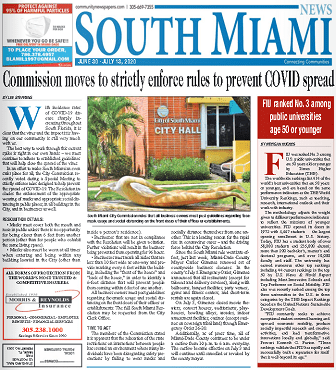