Kendall’s worsening traffic has resulted in a formal resolution requesting that M i a m i – D a d e Commissioners place a moratorium on development throughout the unincorporated area west of Florida’s Turnpike. The resolution was unanimously arrived by the 10-member board of Kendall Federation of Homeowner Associations on Jan. 28.

Traffic congestion that causes “increased travel times such as 30 to 40 minutes to access Florida’s Turnpike and the Palmetto Expressway” was the key reason cited by the KFHA board, as well as concerns for lost time and attendant costs.

Terming Kendall traffic as “unbearable” during peak and off-peak hours as well as weekends, the resolution specified lost time, safety problems and frustration of community residents as major complaints.

“Our quality of life is so seriously impacted, that we are demanding no more development until the traffic problems are fixed,” Rosenberg said. “I can’t imagine anyone who lives in Kendall disagreeing with this resolution. About 400,000 people will end up spending 20 percent of their lives sitting in traffic. It’s enough already!”

The A (best) to F (worst) traffic flow ratings are part of a federal code utilizing a North American Level of Service published in the Highway Capacity Manual and adopted by local governments to standardize classification of traffic conditions.

“The current standard for even the highest ‘green city’ development must satisfy standards only within four miles of its boundaries for county approval,” he said. “That fails to take into consideration how severe large-scale developments with regional impact can create on already existing lineups of cars on connecting arterials outside a four-mile distance,” he stated.

As president of the Winston Park Homeowners Association, Moss noted that the community has approved special payments for private policing to control excess of traffic on local streets, mostly caused by commuting motorists seeking shortcuts to stopped-up traffic at West Kendall major intersections.

“Mayor Gimenez has consistently supported smart growth and remains committed to holding the line on developing beyond the Urban Development Boundary. As he stated on Jan. 11 during his last community meeting with the Kendall Federation of Homeowner Associations, Miami-Dade County is taking a global approach to improving mass transit and mobility in our community. That approach includes doing more to reduce traffic congestion on our roads and promote smoother traffic flow, especially in Kendall. The development moratorium that the KFHA is requesting is not a silver bullet and may have other unintended economic consequences in the community.”

“A building moratorium is not the answer. Implementing a county-wide transit program is the answer. Our local economy is continuing to recover from the worst recession since the Great Depression. A self-imposed recession in the form of a moratorium will put people out of work who (are now) just getting back on their feet.” 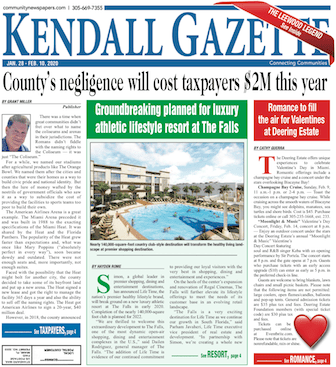 Kendall Chris Pearson - January 28, 2020
In 2004, Miami native Dr. Justin A. Koren was living in New York City, pursuing his post-secondary education, when he heard the news of...