Merrick Festival Caroling Competition was founded by Executive Director Sally Baumgartner Goodman decades ago helping showcase school choirs throughout Miami-Dade County. This annual week long competition held in the first part of December has finally received the status it greatly deserves. At the August 27th City Commission meeting, Mayor Raul Valdes Fauli recognized this long standing event as an official City of Coral Gables event. Aside from providing free entertainment during the course of the nightly competitions in front of the 550 Biltmore Building in Coral Gables, the Festival has awarded $300,000 in cash prizes over the last 32 years to winning choirs. This year choirs will compete for $15,000, funding the schools use to enhance their music programs. For Sally and her donors, this is huge as it insures the continuation of the event even after she retires.

In other good news, A Safe Haven for Newborns just saved 2 more babies over the weekend of August 23. Two babies, both boys, came from different locations in Florida bringing the total number of infants saved since the organization was founded to 306 in Florida, another 5 in other US states and one in Honduras. ASHFN Founder Nick Silverio is a man who works 24/7 with no pay to save these precious lives. Helping pregnant women and saving babies is what Nick is all about and you can help. During the year they do events to help pay for the many services they provide and coming up next is their annual gala at the Intercontinental Miami on October 19. To be a sponsor or buy tickets, email safehaven@asafehavenfornewborns.com or visit www.asafehavenfornewborns.

GFWC FL District 11 women’s clubs from all over Miami-Dade County gathered for a half day Summer Planning Workshop at the Miami Springs Woman’s Club on August 28. District 11 Director Elizabeth Kourtesis Fisher presided over the meeting presenting a comical and very entertaining program dressed as characters from the Wizard of Oz before the meat of the program focused on membership, leadership and finances covered by GFWC FL’s Sara Dessureau and Past GFWC FL: President Charlyn Carruth.

Speaking of service organizations, Rotary’s District 6990 that includes South Miami Rotary, held one of its series of Rotary University events at the Huizenga School at Nova Southeastern University. Topic for the sessions included public image, foundation and membership. Participants came from as far away as Key West. Among the presenters were Mike Kesti and Barbara Gobbi, who addressed Public Image; Norby Rudell and Alan Cohn, on Foundation; Robert Sladoff, on Membership; as well as Joe Roth and Peter Verbeeck.

Among the many others from South Miami and Miami-Dade attending with this writer were Jeff McNabb, Ligia Corredor, Nicolas Eterovic, Noreen Timoney, Maria Kesti, Antonio Pinheiro, Digna Cabral, and Felipe Madrigal, to mention a few. 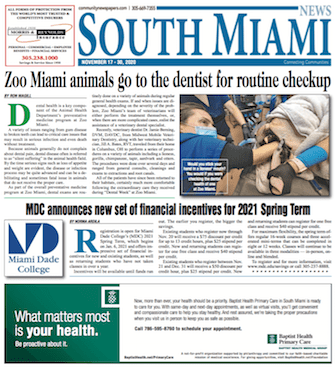