It is said that a civilization where old men plant trees under whose shade they will never sit has grown wise.  That’s not us. That’s not our America. At least, that’s not our Miami-Dade County.

We are a nation obsessed with the short term. Looking for a place to invest your money? Pick a company that promises an impossible growth curve. We want-short term solutions to long-term problems. And if we can’t have that, we don’t have the attention span to focus on the problem for more than a few minutes.

Focus for a moment on just a part of our drug policy. Specifically, our desire to stop drug use.  The thinking is that people who inject drugs are bad. Injections can’t happen without needles. Used needles are a way in which blood borne disease like HIV and hepatitis A and C are spread. Therefore, if we keep people from getting access to needles, we can stop drug addiction and halt the spread of disease.

Miami-Dade County is the sole Florida county that bans the sale of needles without a prescription.  I know this from first-hand experience because I had to get my hands on some needles.

I’m really good at it. When I found out I was a diabetic, my blood sugar was so high I could have used my blood as a desert topping.

I have retinopathy, which affects my vision. And I have neuropathy, which has led to the loss of the feeling in both my feet. It always feels as if I’m wearing six pairs of athletic socks.  It’s so bad that almost four years ago, I got a cut under one of my toes and an infection got it.  Pain that would tip off a normal person that something was wrong went unnoticed by me.

It wasn’t until my toe swelled up to three times its normal size that I went to the Emergency Room. A quick x-ray revealed that the infection had gotten into the bone. It had to come off. The only question was whether I’d be able to keep the foot.  When I woke in the recovery room, I was relieved that I had two feet and nine toes.

So, what’s all that got to do with needles?

I inject myself in the stomach and thighs with insulin, a hormone that lets my body process the sugar in my blood.  To inject, I need needles.

I normally get them without a prescription by mail from a company here in Florida. I ran out last weekend. I started searching around for a local pharmacy that would sell me needles. Because of a local ordinance, pharmacies can’t sell the needles without a prescription. The local law says that the sale of a each needle can get the seller a $500 fine and 60 days in the County Jail.

I did find out that pharmacies in Monroe and Broward sell needles without a prescription.  You can also get them without a doctor’s signature in Tallahassee, the State Capital. Broward used to prohibit it, but recently repealed their law.

Our ordinance was enacted in 1970, during the time that hippies infested Peacock Park in Coconut Grove.  Why are we the odd county out?  It comes from a Puritanical streak that says that those who engage in illegal behavior must be shunned and punished in every possible way, large and small.

It has the effect, though, of harming people with chronic conditions like the one I have, diabetes.  Interestingly, Walmart sells 10 milliliter vials of Novolin insulin for $24.88 each without a prescription. I’ve bought it when I’ve run out of my normal insulin. But I couldn’t buy insulin needles here is Miami-Dade County, even if I was buying insulin.

We are in a crisis in this country when it comes to diabetes. As a nation, we’re becoming older, fatter, and more sedentary. Those are the trifecta of symptoms for winning a lifetime of insulin dependence.  Many people can’t afford insulin and more and more insurance companies are dropping coverage for the newest diabetes medications and better insulins.

My insurance plan stopped covering my Lantus insulin and the manufacturer, Novo Nordisk, offered a discount program for a year.  Without the discount program or insurance, Lantus sells for about $600 a vial. I need three vials a month.

Many diabetics in Miami-Dade County can’t afford the more expensive insulin or even the cost of seeing a doctor. Even when my sweet brothers and sisters use the cheap non-prescription insulin, they can’t get needles over the counter. The American Diabetes Association estimates that approximately 181,000 adults are living with Type II diabetes in Miami-Dade County.

The Centers for Disease Control has concluded that the best way to reduce the spread of blood borne diseases is to have a needle exchange program.  Miami-Dade is considering this and, if our Commissioners and Mayor get behind it, it can save lives.

If the County were to do both, it would see an immediate financial benefit.  The lifetime cost of HIV treatment is estimated to be over a half million dollars. The market price of hepatitis treatments range from $84,000 to $96,000, but it is still prohibitively expensive without insurance.

I had to drive to the Walmart in Miramar to get a box of 100 insulin needles to bring back to my house in Palmetto Bay. The price was about $11 and change.  But the short drive across the county line made me realize that we should start being less Puritanical and more pragmatic about how we deal with the issue of needles, diabetes, and drug addiction.

The County needs to both do a better job at needle exchange for persons with addiction issues and to lift the over the counter ban on syringe sales.  It’s a far-sighted solution for an often near-sighted community.

Stephen Cody is a nearly lifelong resident of South Florida. He was born in Boston but moved before he developed an accent.  He’s been active in local politics since the Nixon Administration and, as a lawyer, was responsible for using the Voting Rights Act to bring single-member districts to both the County Commission and the School Board. 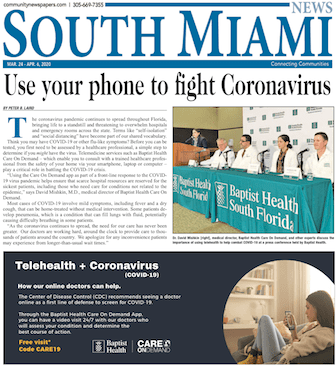