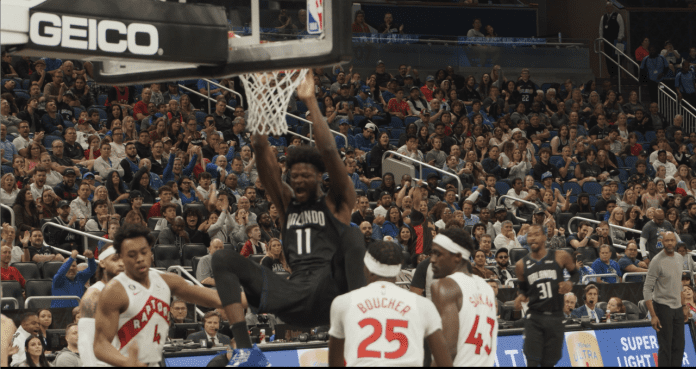 On yet another chilly evening, the Toronto Raptors were seeking to even out the series against the Orlando Magic. The last go around had the Orlando Magic winning a close one as the Raptors made crucial mistakes down the stretch that ultimately cost them the game.  The key inactives for the Raptors coming into the second meeting with the Magic included: Juancho Hernangomez, Otto Porter Jr., O.G. Anunoby, Precious Achiuwa. As for the Magic the key inactives included: Wendell Carter Jr., Gary Harris, Jonathan Isaac, Chuma Okeke, and Jalen Suggs.

From the opening tip, this game played as a defensive slugfest with the Raptors coming out with more energy on that side of the ball. The Raptors were able to hold the Magic to 18 first quarter points, in comparison, the Magic put up 37 on Friday night. To further illustrate the defensive impact both squads had, look no further to their shooting splits: 36.8% field goal, 16.7% from three (Raptors), 33.3% field goal, and 0% from three for the Magic. Additionally, players such as Paolo Banchero and Scottie Barnes were struggling to find a rhythm into their respective offenses, as both shot 2 for 7.

Although the second quarter had the Magic nearly scoring 30 points, it was a similar tone to that of the first. The Raptors continued on their shooting slump, as they remained stagnant in their shooting splits while the opposition somewhat found a rhythm. The Orlando Magic amped it up a bit, improving their shooting splits: 38.5% from field goal and 30.8% from three. An interesting stat from the first half was the amount of free throws attempted for both squads, as the Raptors had a total of 11 attempts while the Magic had 16 of their own. Moreover, the star players still seemed to struggle finding the basket: Pascal Siakam (1 for 5), Scottie Barnes ( 2 for 7), Paolo Banchero ( 2 for 10), and Franz Wagner (1 for 5). While many players for both clubs were struggling with scoring efficiently in the first half, Mo Bamba was excelling as he found himself with 14 points on 100% shooting from the field. At a glance, Mo Bamba was solely responsible for the 8 point lead the Magic had heading into the third quarter.

As soon as the second half started, Moritz Wagner drilled a three to set the tone for what was to come. The third quarter was completely different to that of the first half, as both teams scored over 35 points in the third. Franz Wagner and Paolo Banchero led the way in scoring for the Magic in the third, combining for 14 of the teams 35 points. During this quarter, it once again seemed as if the Magic would pull away with the win as they scored big time baskets that would increase the lead to 14.  However, the Raptors squandered that lead thanks to Fred Vanvleet and Gary Trent Jr., who combined for 22 of their team’s 36 points in an effort to spark their unit.

Coming into the final quarter of this game, many may have thought that the Raptors would finally prevail as they closed in on the lead and their offense started to click. The only question that remained for the Raptors was whether they’ll be able to contain the Orlando Magic long enough to snatch the win. That specific question was answered almost immediately as Franz Wagner went on a scoring run of his own. In the opening minutes of that quarter, Wagner hit back to back to back threes at a pivotal moment in the game, as they only had a three possession lead over Toronto prior to that sequence. The Magic had gone on a 15-6 run which extended their lead to 16 at one point, (largest of the night). The Raptors were able to bring the game back to a single digit lead, but by then it was already too late. The Orlando Magic defeated the Toronto Raptors once again (111-99), sweeping the homestand series.

The Orlando Magic will face off against a divisional rival when the Atlanta Hawks and Trae Young come into town Wednesday. The Atlanta Hawks find themselves in the middle of the pack in this tight eastern conference, currently sitting as the sixth seed. On the season, the Hawks are averaging 113.5 points per game, while allowing for 114.1. The Magic have a difficult assignment in containing the elite scoring guard Trae Young, who is averaging 27.1 points per game. The key inactives for Atlanta heading into Wednesday’s game will include: Dejounte Murray (ankle) and John Collins (left ankle sprain).

For more News about the Orlando Magic visit www.orlandomagic.com

For more sports coverage from MLB, NBA, NFL, to NCAA contact Julian Ojeda at 786-501-9082 or via email julian@communitynewspapers.com 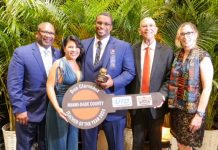 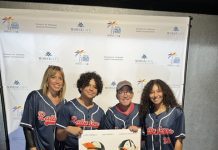 The Orlando Magic lose a close one to the Houston Rockets