When the ancient kings of Siam wanted to exact revenge on their adversaries, they didn’t have them killed or wage war upon them. They gave them a gift — a rare albino elephant. Due to the animal’s fair skin, it had to be kept indoors.  The cost of keeping a white elephant, a creature that could do no work, often bankrupted the recipient.

Mayor Philip Stoddard is South Miami’s white elephant, a creature who risks bankrupting the City before he’s term limited out of office.  Stoddard thinks himself a gift to the City’s residents, but in truth he’s been as much trouble as the pale pachyderms of legend.

You can start with the wrongful termination suit that former Police Chief Orlando Martinez de Castro filed against the City of South Miami. Phil led the effort to fire the Chief on the pretext the Chief’s taking the role of Acting City Manager at the request of Phil and the Commission was a de facto resignation as the City’s top law enforcer.

The City lost the case, at trial and on appeal, which eventually cost the City about $1.5 million.  The firing was actually rooted in the Chief’s refusal to remove portions of the investigation of his March 2011 “burglary” that discussed Phil’s frequent admissions that he was naked with a high school foreign exchange student and his daughter when the break-in was supposed to have occurred.

For a while Phil had a blog, where he not only commented on issues concerning South Miami, but used as a vehicle to exact revenge against his enemies.  Keep in mind that this was not an official city venue. It was Stoddard’s private blog. He published columns that went after Martinez and South Miami Detective Jose Diaz, accusing both of illegal activities.

Separately, both men sued Stoddard for defamation.  The Lopez case was scheduled for trial. Stoddard and Lopez were eyeball-to-eyeball when Stoddard blinked.  The case was just dismissed — the Miami-Dade Clerk published noticed of a settlement. Sources I have spoken to say that Lopez was paid over $100,000.

After fighting for so long, why did the City and Stoddard throw in the towel? It’s likely that the result of an FDLE investigation undertaken at Stoddard’s demand proved that the central pillar of Phil’s defense was meritless. Phil claimed he was the victim of a police conspiracy because of the numerous notations about his notorious nudity. The FDLE’s conclusion was that there was no conspiracy against Phil by Lopez and the other officers.

Sources tell me that when the results of the FDLE investigation were tossed into Stoddard’s lap by Stephen Cody and finally made public, Phil had no choice but to pay out through the trunk – er – nose.

The Chief’s slander case against Stoddard is awaiting trial, but I expect that it will be settled like Lopez’s was, quietly and without notice.  That case is being defended with an attorney also provided by the City’s insurer. It remains to be seen how much this will eventually cost the City.

We still need to add in the costs of Phil’s defense of the pending ethics complaint filed by Cody. Phil twice kept Cody from speaking at a public meeting of the City Commission.  Cody complained to the County’s Ethics Commission and they found probable cause that he violated the Citizens’ Bill of Rights. The case is moving forward to a hearing that may determine whether Phil forfeits his position as Mayor.

After initially agreeing to cover the cost of Stoddard’s defense in Cody’s ethics complaint, the City Commission reconsidered and voted not to pay for his defense.  Never hesitant to worm his hand into someone else’s pocket, Phil made another claim on the City’s insurance policy. In a shade meeting out of the public eye, Steve Alexander told the Commissioners that, notwithstanding their decision not to fund Stoddard’s defense and notwithstanding a limit on the City Manager writing checks over $5,000, he was going to pay the $75,000 deductible out of City funds.

Plus, the Mayor just settled the suit brought against him by a young man who went into distress at a Halloween party at Phil’s house and Phil refused to call 911.  Luckily, the young man recovered and is making Stoddard pay. Thankfully, Stoddard couldn’t think of a way to claim that hosting a Halloween party for teens was part of his official duties and sticking City taxpayers with the tab.

Phil has cost the citizens of South Miami close to $2 million for his grudges, his vanities, and his follies.  He is proving to be the whitest of white elephants. Here’s hoping that he doesn’t send the City hurtling towards bankruptcy during the final year of his last term. 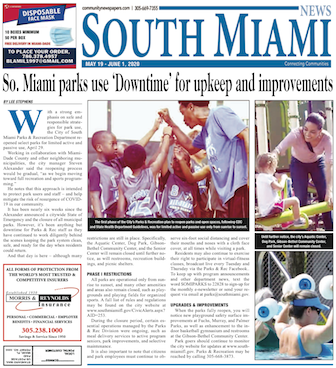