When Miami-Dade Police Officer Orlando Freitas stopped a reckless car driver, he had little idea his arrest would lead to capturing a suspect in a Miami Beach shooting incident.

Checking two youthful male occupants during an otherwise normal traffic stop, Freitas saw the passenger holding a gun and immediately drew his own firearm, held the pair at gunpoint and summoned emergency assistance.

Once arrested and being transported in a cruiser, the young (in his 20s) gun-holder spontaneously stated: “I just got into a shooting on the Beach today, and just want to go home.”

Instead, he headed for a county jail when his description matched a BOLO (be on the lookout) bulletin earlier issued for the driver’s vehicle tag, sought for in shooting at Sixth Street and Collins Avenue, Miami Beach.

For his alertness and teamwork on Mar. 20, Freitas was declared Officer of the Month for Kendall District, commended for his “high degree of initiative” as well as dedication and performance of duty by CAC chair Barry White and Maj. James J. O’Donnell.

What they really do: the Miami-Dade Department of Solid Waste Management 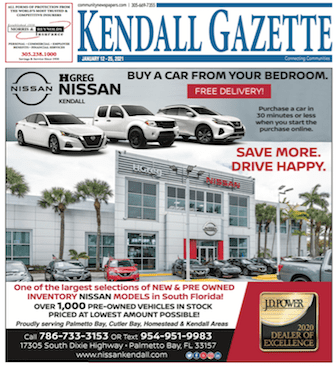