The board of directors at Miami-Dade County Youth Fair & Exposition has hired Eduardo “Eddie” Cora as its new president and CEO.

“We are pleased to announce that Eddie Cora will be leading the Miami-Dade County Youth Fair & Exposition,” said Nelson C. Bellido, chair of the board of directors. “While searching for candidates to lead our organization, Eddie stood out for his ability to bring years of valuable Youth Fair experience to the table. As a longtime board member and former chairman of the board, he understands our business and has the ideas needed to carry it well into the future.”

A resident of Miami since 1979, Cora was elected to The Youth Fair board of directors in 2000 and served two terms as chair. Before taking the helm at The Youth Fair, Cora was involved with the landscaping and agricultural industries since 1998. He promoted best management practices in landscaping to ensure environmental sustainability throughout all communities in Florida. He is a certified arborist with the International Society of Arboriculture, and worked with partners in the community to preserve and increase the canopy coverage in Miami-Dade County.

The Miami-Dade County Fair & Exposition (The Youth Fair) is the largest charity event in South Florida. The not-for-profit association is dedicated to promoting education and agriculture while showcasing and rewarding youth achievement and providing quality family entertainment, all without taxpayer dollars. The annual Youth Fair exhibits 63,477 student projects to nearly half a million Youth Fair guests and, in 2018, awarded $520,926 in college scholarships, cash premiums and awards to students. To date, The Youth Fair has presented well over $11 million to the Miami-Dade community.

The Fair Exposition Center, which is the second largest convention center in Miami-Dade County, hosts an additional 70 community events each year. Visit fairexpo.com or call 305-223-7060. 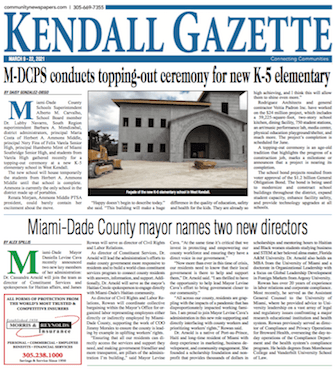