Bill would increase the minimum wage to $15 by 2025 & raise wages for approximately 140,000 workers in Florida’s 27th Congressional District

Rep. Donna Shalala (D-FL) voted to pass the Raise the Wage Act, a landmark piece of legislation that will gradually increase the federal minimum wage to $15 over the next six years. Independent economic analysis estimates that the bill, which Rep. Shalala proudly cosponsored, would increase pay for up to 33 million American workers, including hundreds of thousands of workers in Miami-Dade County and nearly 2.4 million Floridians – more than a quarter of Florida’s workforce.

“For years, tens of thousands of people in my district have been working two – sometimes three – jobs to keep a roof over their heads and food on the table for their families,” said Rep. Shalala. “In the United States, and in particular in Miami-Dade County, where the cost of living is only going up, no one who works full-time should live in poverty.”

The Raise the Wage Act would provide the first increase in the federal minimum wage in over 10 years – the longest stretch in history without a minimum wage increase.  Currently, a full-time worker earning the federal minimum wage cannot afford to rent a two-bedroom home anywhere in the United States. According to the Congressional Budget Office, the Raise the Wage Act would directly increase the wages of nearly 17 million workers and lift more than 1.3 million Americans out of poverty, including 600,000 children.

The Dinos have landed at Zoo Miami 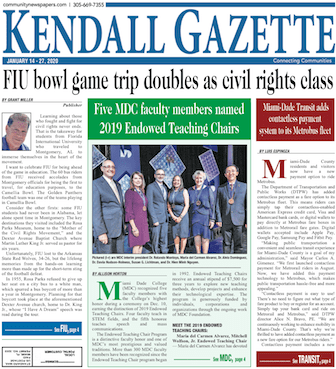