Miami based trial attorney Robert L. Parks, principal and founding partner of the Law Offices of Robert L. Parks, has been appointed to the board of trustees for the National Judicial College.

Parks is a past chair of the Board of Visitors for the college, which educates and trains trial judges from around the country.

A nationally recognized trial attorney with more than 50 years of experience, Parks is a highly respected advocate in the courtroom and a leader in the community. Since being admitted to the Florida Bar in 1964, Parks has represented hundreds of plaintiffs in personal injury, wrongful death, aviation, large manufacturing and automobile cases in the Americas and around the world.

In 2012, he was selected to receive the Perry Nichols Award from the Florida Justice Association, given annually to a Floridian who has fought with distinction for justice throughout his life. The prestigious award was established in 1977 as a permanent tribute to Perry Nichols, an FJA founder and nationally renowned Florida trial attorney. Past recipients include Gov. Reubin Askew, Sen. Claude D. Pepper, Gov. Leroy Collins and Justice James Adkins.

Parks was honored by the Southern Trial Lawyers Association and received the prestigious 2011 War Horse Award, its highest honor, for extraordinary contributions to the cause of justice. All nominees for this award are acknowledged leaders in their communities who have been actively practicing for more than 30 years, demonstrated outstanding skill as trial advocates and shown exceptional contributions to furthering the cause of justice.

In 2015 Parks received the Legal Legends Award from History Miami’s 11th Judicial Circuit Historical Society. The award recognized members of the legal community who made significant contributions to the law, legal system or the administration of justice in the 11th Judicial Circuit for at least 25 years or more.

A longtime environmental advocate, Parks serves as litigation chair and board member for the Everglades Foundation, an internationally recognized organization dedicated to creating relevant and creative solutions to complex restoration issues without burdening taxpayers.

Parks served as volunteer chairman of the state’s Environmental Regulation Commission from 1978 to 1986 under Gov. Bob Graham. For his dedicated leadership, Parks was named The National Audubon Society’s Environmentalist of the Year. In keeping with his commitment to protect the environment, Parks was an original member of 1,000 Friends of Florida, where he served as litigation chair for 13 years.

A leader in the South Florida community, Parks also served for nearly 20 years under three governors in leading efforts to restore the Miami River, culminating in serving as the first chair of the Miami River Commission in 1998.

In the South Florida community, Parks serves on the Dean’s Advisory Board for Florida International University’s College of Law. He is a past member of the board of trustees for HistoryMiami, which hosted a 50th anniversary celebration of Legal Services of Greater Miami. Parks, an active member of Legal Services of Greater Miami since its founding, was honored at this event. 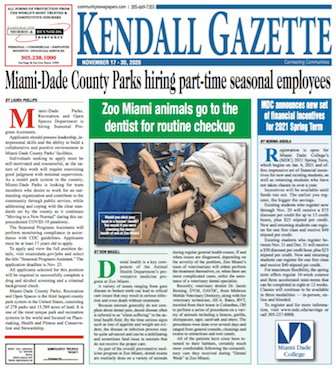