Akerman LLP, a top 100 U.S. law firm serving clients across the Americas, has been selected as one of the nation’s most innovative law firms by the Financial Times for the third consecutive year. The firm was included in 2017 FT 25 North America list, which recognizes market leaders who are driving change in the areas of the business of law, legal expertise and access to justice. Akerman received further distinction in the Driving Value and Litigation and Disputes categories.

Akerman Chairman and CEO Andrew Smulian also were honored as one of the top 10 legal innovators in North America. Noted by the Financial Times for his commitment to anticipating and embracing change, Smulian oversaw the creation of the legal industry’s first law firm R&D co-venture with clients, which earned Akerman distinction as one of the top forward-thinking law firms in North America by the Financial Times in 2015. He also advanced one of the most ambitious philanthropic and pro bono efforts for abused and neglected children in the family court system, which placed Akerman among the Financial Times’ most innovative law firms in social responsibility that same year.

Akerman’s lauded experience in U.S.-Cuba policy earned the firm recognition among the top seven law firms in the Driving Value category. The firm was highly commended for expanding Expedia’s online travel booking service to Cuba. Regarded as corporate America’s go-to legal team for Cuba by CNN Money and Chambers Latin America, Akerman developed a strategy to comply with revisions to U.S. travel restrictions in Cuba as well as political tensions between the nations. This represents the second consecutive Financial Times ranking the Cuba Practice has received. In 2016, the Akerman team was recognized for its innovative regulatory work for clients, after constructing a groundbreaking legal framework that enabled its client Musicabana to launch the largest, most historic music event of its kind in Cuba.

Akerman also was highly commended among 11 law firms in the Litigation and Disputes category, with a special commendation for Fraud & Recovery Practice Group Co-Chair Michael Goldberg, who served as the SEC-appointed receiver in the case of Jay Peak Resort, the largest fraud scheme in the history of the federal EB-5 Immigrant Investor Visa Program. The case achieved the nation’s largest recovery of EB-5 investor losses and increased the resort’s profitability from $1.8 million to $10 million, saving thousands of local jobs.

The annual Innovative Lawyers report was developed by the Financial Times in partnership with RSG Consulting. Each year the team conducts an investigation on the challenges that businesses face and how lawyers have innovated to help their clients solve them. Firms are selected following extensive independent research and direct client feedback. 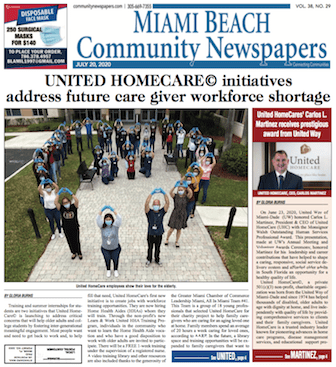 Columbus Names Center for Science & The Arts in Honor of Marcus Lemonis and...

Columbus Names Center for Science & The Arts in Honor of...