It will take more than magic to make the Miami-Dade school district’s budget crisis disappear, with both state revenue and local property value down. With ingenuity and tough choices, however, we have crafted a budget that follows the District’s guiding principles—no teacher cuts, protection of the most vulnerable members of the District’s workforce, no reduction to art and music classes—while shrinking class size, improving the District’s bond rating, holding the line on local taxes, and maintaining fiscal viability.
Created more with a surgeon’s needle than a magician’s wand, the proposed budget reflects an unprecedented level of transparency, with input from top business executives, chambers of commerce, school administrators, parents and others. When Miami-Dade School Board members officially consider the proposal next month, they will find a budget that balances the protection of our workforce with the protection of the classroom and respect for the taxpayers of Miami-Dade County. They will find a budget that reflects our unshakable commitment to our core values yet also includes more than $80 million in savings initiatives.
Holding fast to what we value can be a challenge, especially as plunging revenues, rising costs, and state mandates have forced us to cut more than $400 million from our budget since 2007-2008. Through this budget, however, we hold firm, boosting reserves by $21 million to bring total reserves to more than $100 million. A level we have not reached in more than a decade. It is this type of fiscal responsibility that has strengthened Wall Street’s confidence in Miami-Dade County Public Schools (M-DCPS) with Moody’s recently affirming the district’s A1 rating and lifting a negative outlook. As a result of significant fiscal improvements in district management over the last two years, the outlook is now “Stable.”
To maintain such stability without raising taxes requires improved efficiencies and strategic cuts. These include a recommended $8 million from the central office that brings total central-office cuts over the last two years to more than 33 percent. As a result, we will recoup $26 million in savings, for example, by having staff complete maintenance programs previously outsourced to contractors.
Unlike many other school districts across the country and state, Miami-Dade has managed to balance its budget even as its total budget has shrunk by more than $1.5 billion. This has been done without resorting to layoffs or compromising the District’s academic or fiscal integrity. In fact, despite the economy, Miami-Dade’s schools and students have made notable academic strides in the last three years, with M-DCPS third-graders outperforming or matching their counterparts in every large Florida district in FCAT reading and mathematics gains this year. In addition, M-DCPS students scored higher than their counterparts in such major U.S. cities such as New York, Los Angeles, and Chicago in mathematics on the 2009 National Assessment of Educational Progress Trial Urban District Assessment. These students achieved this despite overcoming such hurdles as a high rate of poverty, language differences and disabilities in the process.
The recommended budget for 2010-2011 positions the District to build on this trend of success, poised to start the new school year this month in a position of strength.
Still, worse days may be yet to come. Federal stimulus dollars through the American Recovery and Reinvestment Act are set to run out in 2011. Unless Washington and Tallahassee act now to plug that hole, M-DCPS and other districts across the state face a funding catastrophe that could well force us to cut the programs we hold most dear.
For now, however, we can take hope in knowing that, whether through sorcery or surgery, a sound, solid M-DCPS will live on for another year of service to our students and community, using its given resources to reach ever-higher levels of student achievement and continue giving our students the world.

Letter from the Chairwoman 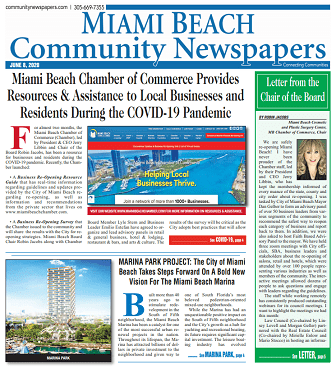