100+ Women Who Care was started in 2006 in Jackson, Michigan by Karen Dunigan. It began as a simple way to quickly raise money for a local charity in need of baby cribs.  She rallied her network of friends and assembled a group of 100 women. Each woman wrote a check for $100 directly to the charity. In one hour, they raised over $10,000 that would buy 300 new cribs. When Karen realized how easy it was to raise money for this cause, the idea of 100+ Women Who Care was born.

100+ Women Who Care South Florida was launched in November 2012.  Kim Rodstein, member of the Miami Beach Chamber with Keller Williams Miami Beach, was a recipient for her charity, South Florida Society for the Prevention of Cruelty of Animals Horse Rescue.  From then on Kim was hooked and  got with her friend, Jamie Levenshon-Najman who is with Hays Insurance, to begin the Miami Dade Chapter of 100+ Women Who Care.   Every chapter meets once per quarter, at which time each member has the chance to nominate a charity for donation. Three charities are randomly selected and presented to the group which then determines the recipient of funds by a majority vote.

The Miami Beach Chamber of Commerce Education Foundation is represented by Board of Governor’s member, Mirielle Enlow, the Executive VP of Keller Williams.  Mirielle was fortunate enough to have the opportunity to present the needs of the Education Foundation recently and was voted to win the reward of $8000.  The Education Foundation provides education opportunities and access to medical attention for our children by offering scholarships and grants to students and teachers in Miami Beach and its feeder patter schools.  Proceeds from the golf tournament have funded over $200,000 worth of programming costs for the International Baccalaureate (IB) program throughout the years. This program, available at all the public schools in the City of Miami Beach feeder pattern, helps develop the intellectual, personal, emotional and social skills of students ages 3 to 19 and gives them the necessary tools to live, learn and work in a rapidly globalizing world. In addition, the Chamber’s Education Foundation will use additional funds raised to complete its mission to support the needs of public education by donating scholarship funds to graduating seniors from Miami Beach Senior High School at the end of the school year.

The Foundation has built an incredible coalition of support for a healthcare program within each of the eight schools in our Miami Beach feeder pattern. We have provided a school nurse and a full-time assistant in three of the schools along with various other health screenings for the past three school years. Additionally, last year we were able to include a social worker in those same schools and the success of the program was so great that we were asked to expand the social work benefit to the other five schools in the feeder pattern for this year. We have been able to garner the support financially for these services by taking the initiative and being awarded an initial grant of $30,000 in 2013 when we won first place in the National Aetna Voices of Health competition. With that win, we successfully garnered additional financial support from the Health Foundation of South Florida which provided $62,500 as a challenge grant if could match those dollars from the five neighboring municipalities within which the children live that attend our schools. Once again, we were successful in lobbying and earning the support from all five cities: Miami Beach, North Bay Village, Surfside, Bay Harbor Island, and Bal Harbour.

The Education Foundation provides as many as three teachers’ grants of up to $1,000 a piece in each of the eight public schools that are part of the Miami Beach public school feeder pattern. We call this the “Links Project” as it demonstrates the “linkage” between the business community, from whom we raise the funds, and public education. Every teacher in all eight schools are eligible to make an application that is pre-approved by their department chair and principal prior to submission to the Chamber Education Foundation. The proposals must discuss their desire to create a new and innovative program within the teacher’s classroom that could not exist without this Chamber grant. The application must specify the number of children that will benefit from the establishment of their program. 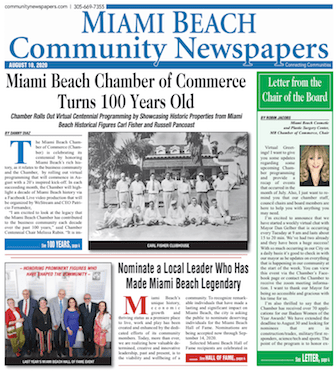