“The cultural reckoning of our current times has irrevocably and positively changed sensibilities surrounding inclusiveness and diversity,” said Festival director Jaie Laplante. “Director Tom Donahue’s This Changes Everything, created by CreativeChaos vmg and New Plot Films, is a vital and inspirational showcase of values that reverberate throughout the program of our 36th edition.”

“I look forward to another dynamic and impactful Miami Film Festival covering such timely topics. We are so pleased and honored to deliver to Greater Miami this high-caliber event that elevates the standing of our community on the global stage. Film is such a thought-provoking and educational medium,” added MDC’s President, Dr. Eduardo J. Padrón. “I commend Jaie and his team for such a powerful lineup.”

Golden Globe-winning actress Patricia Clarkson will receive the Festival’s Precious Gem Award on Monday, March 4th at the historic Tower Theater Miami. Clarkson won the 2019 Golden Globe for her role in Jean-Marc Vallée’s HBO limited series Sharp Objects, received an Oscar nomination for her pivotal role in Peter Hedges’ Pieces of April (03), a Tony Award nomination for the Broadway production of The Elephant Man, and won 2 Emmy Awards for her work in Alan Ball’s Six Feet Under. In a career spanning more than 30 years of work, Clarkson’s oeuvre is remarkable for her versatility in working with both top independent cinema artists such as Tom McCarthy, Todd Haynes and Isabel Coixet and popular big-budget mainstream work for directors Martin Scorsese, Brian de Palma, Clint Eastwood and in The Maze Runner trilogy. The Award presentation will be presented by a Tribute sponsored by Estrella Damm.

The Festival announced Knight Heroes, a new program for 2019 created with the support of the John S. and James L. Knight Foundation. With a focus on the emerging new generation of South Florida moving image content creators, three bold and bright talents will share their insights, observations and advice about their creative paths and future outlooks in a two-hour in-person session at Olympia Theater. The inaugural edition of Knight Heroes features Oscar-winning, Miami-born filmmaker Barry Jenkins (Moonlight, If Beale Street Could Talk), award-winning filmmaker Boots Riley (Sorry to Bother You) and Aaron Stewart-Ahn, co-writer of the acclaimed break-out hit Mandy.

In all, the Festival will present more than 160 feature narratives, documentaries and short films of all genres, from more than 40 different countries. The 36th edition of the Festival runs March 1st – 10th. The Festival will wrap up with an Awards Night Gala event at Olympia Theater, where the North American premiere of Spanish director Enrique Urbizu’s Gigantes will screen, presented in person by series stars Juan Carlos Librado and Isak Férriz.

The Opening Night Film of the Festival’s signature $40,000 Knight MARIMBAS Award competition, sponsored by the John S. & James L. Knight Foundation, will be the World Premiere of Dominican Republic filmmaker José María Cabral’s The Projectionist, the highly-anticipated follow-up to his 2017 international breakout hit, Woodpeckers (Carpinteros). The film will screen on March 2nd at Silverspot Cinemas. Also competing in the program is Tobal’s The Accused and Julio Hernández Cordón’s Buy Me A Gun; an earlier work by Hernández Cordón won the Festival’s top prize in 2011, Marimbas From Hell, and it is for that film that the category is now named – representing deep and rich resonance for cinema’s future. Additional films selected for this year’s Knight MARIMBAS Award competition are:

Three distinguished filmmakers will additionally be part of the Festival’s  Marquee Series, each featuring a film screening accompanied by on-stage conversations with major film personalities of the moment, discussing their career and sharing an exciting new work. They are:

For the second year of the Festival’s Knight Made in MIA Award competition, sponsored by Knight Foundation, the Festival will award two prizes – $30,000 to the best feature-length film making a minimum Florida premiere in the Festival and $10,000 to the best short film – of any genre – that features a substantial portion of its content (story, setting and actual filming location) in South Florida, from West Palm Beach to the Florida Keys, and that most universally demonstrates a common ground of pride, emotion, and faith for the South Florida community.

The Opening Night Film of the Knight Made in MIA Award feature film program will be the World Premiere of the new Rakontur production, Billy Corben’s Magic City Hustle, an eye-opening look at some unexpected players in Miami’s gig economy. Magic City Hustle will screen on March 2nd at Tower Theater Miami as one half of a double-header that also includes the Miami premiere of Screwball, Corben’s expose of the Major League Baseball doping scandal that had its origins in Miami in the earlier part of the decade. Also competing for the feature film prize is Scholl-Johnson’s Singular and Corrigan’s Huracán. Additional films selected are:

The Great Mother, Magic City Hustle, The Mamboniks, Miami Basel: Art’s Winter Playround, Pahokee and Singular will additionally compete for the $10,000 Documentary Achievement Award. The Opening Night Film for the Knight Made in MIA Award short film prize will be the North American premiere of Faren Humes’ “Liberty”. Additional films nominated for the short film prize are:

“My Daughter Yoshiko” will additionally compete for the Festival’s $5,000 Zeno Mountain Award.

The winning short film will receive $5,000 and the four runners-up will receive $1,250 each. In addition, the nominating jury selected “Where Chaos Reigns” (Venezuela, Braulio Jatar) to receive an Honorable Mention in this category.

The newly reconceived $10,000 Jordan Ressler First Feature Award returns with a diverse slate of new directors from all corners of the globe. The award is sponsored by the South Florida family of the late Jordan Ressler, an aspiring screenwriter and Cornell University Film Studies graduate who, during his brief entertainment career, held production positions on Broadway hits before passing away in a tragic accident at the age of 23. The Extraordinary Journey of Celeste García filmmaker Infante will additionally compete for this Award, with these finalists:

In partnership with Miami Design District, the Festival presents a special Miami edition of the acclaimed Fashion in Film Festival, curated by Marketa Uhlirova (University of the Arts London) with Caitlin Storrie on the Festival’s closing weekend. The edition features six enticing programs of screenings, talks and live performances, offering a dialogue between cinema, fashion and art as three distinct areas of creative practice bound by affinities, overlaps and continuities. Highlighting a range of poetic sensibilities in showing dress and the adorned body in motion, the Fashion in Film Festival mixes artist, avant-garde and underground cinema with early advertising and documentary films, as well as contemporary fashion films. The program includes:

The Weight of Water joins the previously announced nominee from the Festival’s fall GEMS program,Champions (Spain, Javier Fesser), and “My Daughter Yoshiko” from the Knight Made in MIA Award category to compete for the Festival’s $5,000 Zeno Mountain Award presented by Fringe Partners, a group of films which celebrate the diversity of abilities and disabilities. The award seeks to reward the film which helps break down barriers to our understanding of people living with disabilities. Additional nominated films are:

A new award for 2019 was announced, the Alacran Music In Film Award. Created to celebrate the artist and individual behind the composition of a film’s music score and highlight the importance of music in film, a $5,000 cash prize for Best Original Score will be awarded, courtesy of Alacran Group.

In addition to Screwball, films screening out of competition include:

“The Rafter” by Jose Navas is a finalist for the Festival’s $5,000 IMDB Pro Short Film Award. Additional films in the competition are:

The Festival takes a special look at the Chinese film market this year, sponsored by Beijing Hainabian Culture & Arts Development Corp and the Confucius Institute at Miami Dade College. A day-long symposium on the trends and markets will be held, in conjunction with the Festival screening of numerous Chinese-produced feature films listed above.

The Festival will co-present its first AFTER-DARK special event in collaboration with O Cinema Miami Beach. A “From The Vault” 40th anniversary screening of Ridley Scott’s 1979 classic Alien will be held at 11:59pm on Friday, March 8th.

South Florida college students will battle it out in the Lynn and Louis Wolfson II Family Foundation Cinema Slam Competition 2019. This year’s CinemaSlam offers a new category with a new cash prize of $5,000 for the Best Film Featuring Archival Material. A variety of cash prizes will also go to work-in-progress projects that plan to make use of archival material from the Lynn and Louis Wolfson II Media Center to support their content.

The Festival is produced with additional support from the Miami Beach Visitor and Convention Authority and the City of Coral Gables.

Individual tickets for all Festival events will go on sale to the general public beginning Feb. 8. Festival members have the opportunity for pre-buy. For more information, visit miamifilmfestival.com or call 1-844-565-6433 (MIFF) or 305-237-FILM (3456). 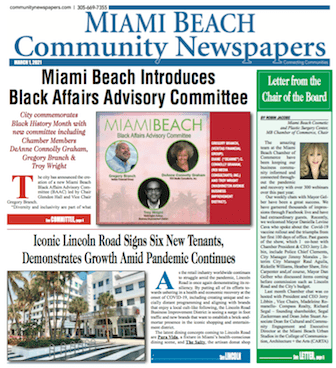