Karyn Cunningham, a 17-year resident of Palmetto Bay and a Miami-Dade County native who grew up in Pinecrest, is running for the position of vice mayor with the goal of making village government more open and responsive to residents.

“I strongly believe that a failure to communicate with the residents of the village and its neighboring communities has taken the Village of Palmetto Bay off course,” Cunningham said. “As vice mayor, I know I can return the village to open government and restore the peoples’ voice. I supported incorporation 10 years ago because I believed then as I do now that a closer connection to our elected officials provides a clear benefit.”

Cunningham said that recently she has seen a shift toward a more insulated local government whose focus has become very narrow.

“As vice mayor, I want to open our village government to all of our residents while working to stop the wasteful spending that has taken place and shift our focus to those things that our residents feel are important, such as lowering taxes and enhancing our quality of life,” she said. “I share my goal with many of our residents, to once again make our community one we can all enjoy living, working and playing in.”

Cunningham worked as a teacher in Miami-Dade County Public Schools from 1985 to 2004 and has served as a coordinator and education advocate with United Teachers of Dade from 2004 to the present. Cunningham said that she would bring a fresh approach with seasoned experience in government process and procedure.

opinions. I am an advocate for education and I want to bring public and private school representatives together to improve the quality of life for all village residents.”

1. Stop government waste. A strong advocate for fiscal responsibility, she will work to stop the wasteful government spending and reckless misappropriation of funds that she says has plagued the community.

2. Lower taxes. She will work to create a comprehensive budget that will lower taxes by eliminating unnecessary spending and maximizing efficiencies within village government. She also will challenge all proposed new tax increases and reckless fee assessments.

3. Improving quality of life. She is committed to the expansion and enhancement of parks and recreational facilities and to the beautification of green spaces and right-of-ways. She will work closely with village police to ensure that neighborhoods and public places are patrolled adequately and effectively.

“I want to restore the most important voice in the community — that of the residents,” Cunningham said. “In our conversations, the residents have told me the things that are important to them. My experience in building consensus and coalition will help to restore and unify our voice in Palmetto Bay to make our community a place that we are happy to call home.” 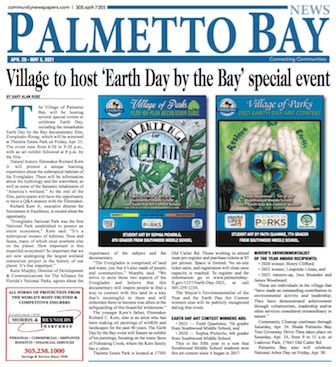