The Miami-Dade Beacon Council, the county’s official economic development partnership, has announced that Korn Ferry has been engaged to handle the organization’s search for a new president and CEO.

“Our search committee, led by chair Jaret Davis, is inclusive of our diverse community. The committee is confident Korn Ferry will identify qualified candidates with top-level experience in economic development,” said Sheldon T. Anderson, interim president and CEO of the Miami-Dade Beacon Council.

The job qualifications, called “Opportunity Profile,” have been posted on the Miami-Dade Beacon Council’s website. Applications will be accepted until the position is filled.

“We expect the position to be filled by early February 2017,” Anderson said.

The search engagement team will be led by Bonnie Crabtree, office managing partner of the executive search firm in Miami.

Korn Ferry was chosen from six executive search firms the Miami-Dade Beacon Council had requested proposals from after the former president and CEO Larry K. Williams relocated to Atlanta to take a position as the CEO of the Technology Association of Georgia.

Anderson, a past chair of the Miami-Dade Beacon Council and past president and CEO of the southeast region of Northern Trust, was named Interim in October.

The Miami-Dade Beacon Council is Miami-Dade County’s official economic development partnership. The not-for-profit public-private organization focuses on job creation and economic growth. Since 1985, the organization has assisted more than 1,000 businesses that have created more than 65,000 direct jobs and added more than $4.3 billion in new capital investments. It accomplishes this by marketing Miami-Dade as a world-class business location, growing local companies and shaping the local economy’s future. 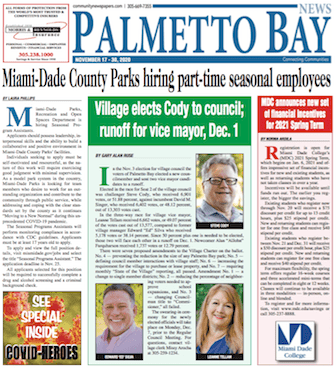