First, on Mar. 2 she was recognized with a “Women of Impact” Award. Then, on Mar. 13 she was honored with the Mayor’s Pioneer Award during the “In the Company of Women” reception.

The first event, which celebrated “women of character, courage and commitment,” took place at the Hyatt Regency in Coral Gables and was conducted by the Women’s History Coalition, an organization founded in 1983 by a group of women in Miami-Dade County to coordinate and promote Women’s History Month. Robinson was one of eight new women inducted into its ranks.

At the second event, Robinson was chosen for the Mayor’s Pioneer Award by Mayor Carlos Gimenez as part of the 26th annual “In the Company of Women,” hosted by the Miami- Dade County Commission for Women, Parks Foundation of Miami-Dade, and Miami-Dade Parks, Recreation and Open Spaces Department.

Twelve women leaders were honored for their achievements in their respective fields during an awards ceremony presented by Macy’s, which was preceded by a networking reception, at the Coral Gables Country Club. The ceremony was emceed by WPLG Channel 10 Meteorologist Betty Davis,

“I truly accepted that honor on behalf of all of Palmetto Bay,” Robinson said during an interview on Mar. 23. “I was so honored and really humbled by this. It’s very exciting when you receive recognition after you’ve done something you really loved every minute doing.”

Robinson said that serving on the Palmetto Bay Village Council as vice mayor was one of the happiest times of her life, following one of the saddest times, the loss of her beloved husband, Ken, to cancer. They both had been involved in the crusade for incorporation of Palmetto Bay and were champions of better parks. Linda Robinson was the only woman elected to that first village council and she earned the respect of the other council members, whom she regarded as “family.”

Former Village Mayor Eugene Flinn said after the presentation, “I am pleased to have sponsored her for this well deserved honor.”

Robinson’s daughter, Lisa R. Goodman, wrote a letter of recommendation to the Commission for Women, describing her mother’s efforts on behalf of all village residents. but also touching on the way she inspired others of her gender.

“Always an advocate for education and self-improvement, Linda encourages other women to reach goals, accomplish more, remain active and motivate others,” Lisa Goodman wrote, in part. “Her leadership qualities allow her opinions to be heard, her rationale understood and ultimately her points to be agreed with and pushed forward.”

Robinson remains active in the field of real estate.

Westminster Brings Christmas to the Bahamas 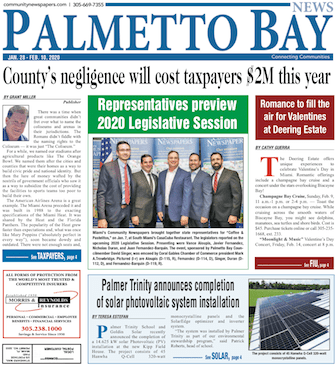