Eduardo Padrón is the President Emeritus of Miami Dade College (MDC), having served as its President for almost 25 years. He is credited with elevating MDC, the largest degree granting institution in America, into a position of national prominence among the best and most recognized U.S. colleges and universities. An economist by training, Dr. Padrón earned his Ph.D. from the University of Florida. In 2018, he was elected a Fellow of the American Academy of Arts & Sciences, one of America’s oldest and most prestigious organizations. In 2016, President Barack Obama awarded him the Presidential Medal of Freedom, the highest civilian honor in the U.S., for being a prominent national voice for access and inclusion in higher education. In 2009, TIME magazine included him on the list of “The 10 Best College Presidents.” In 2010, Florida Trend magazine placed him on the cover of its inaugural “Floridian of the Year” issue.

In 2011, The Washington Post named him one of the eight most influential college presidents in the U.S. Also in 2011, he was awarded the prestigious 2011 Carnegie Corporation Centennial Academic Leadership Award. In 2012, he received the Citizen Service Award from Voices for National Service, the coveted TIAA Hesburgh Award for Leadership Excellence, and the Aspen Institute Ascend Fellowship. In 2015, he was inducted into the U.S. News & World Report STEM Hall of Fame.

He was awarded the Harry Truman Award from the American Association of Community Colleges. Dr. Padrón’s energetic leadership extends to many of the nation’s leading organizations. He is the past chair of the board of directors of the American Council on Education (ACE) and is a past chair of the board of the Association of American Colleges and Universities (AAC&U) and former chair of the Business Higher Education Forum (BHEF). During his career, he has been selected to serve on posts of national prominence by five American presidents.

Internationally, President Padrón’s accomplishments have been recognized by numerous nations and organizations including the Republic of France, which named him Commandeur in the Ordre des Palmes Académiques; the Republic of Argentina, which awarded him the Order of San Martin; Spain’s King Juan Carlos II, who bestowed upon him the Order of Queen Isabella; Spain’s Prince and Princess of Asturias, Felipe and Letizia, who presented him with the Juan Ponce de Leon 500th Anniversary award; Morocco’s King Mohammed VI, who appointed him Honorary Consul in Florida of the Kingdom of Morocco in 2016, and the Amicus Poloniae from the Republic of Poland.

Dr. Padrón’s pace‐setting work at Miami Dade College has been hailed as a model of innovation in higher education. He is credited with engineering a culture of success that has produced impressive results in student access, retention, graduation, and overall achievement. MDC enrolls and graduates more minorities than any other institution in the United States, including the largest numbers of Hispanics and African‐Americans. Under Dr. Padrón’s leadership,

Miami Dade College has received national recognition for its longstanding involvement with its urban community, its catalytic effect for social and economic change, and the marked difference the College has made in student access and success through pace‐setting initiatives. He has served on several national commissions including Aspen Institute, Council on Foreign Relations, Woodrow Wilson Foundation, Knight Foundation, Ford Foundation, Mellon Foundation,

He currently serves on the boards of the Council on Foreign Relations; Urban Institute; Spencer Foundation; Education Trust; ACT; College Promise (Chair); National Commission on Inclusive Capitalism; Dream.US; Concordia Leadership Council; International Association of University Presidents; Achieving the Dream; and World Strategic Forum (Chair). In past years he has held leadership positions on the boards of the Federal Reserve Board of Atlanta, Miami Branch (past Chair); the Carnegie Foundation for the Advancement of Teaching; Hispanic Association of Colleges & Universities (Chair); the Kennedy Center for the Performing Arts; the White House Commission on Educational Excellence; Campus Compact; Congressional Hispanic Caucus Institute; The College Board; and the White House/Congressional Commission of the National Museum of the American Latino.

He is the recipient of numerous honorary doctorates and prestigious awards. Dr. Padron is a prolific writer with several chapters and articles to his credit.

The Florida Council of 100 is a private, nonprofit, nonpartisan organization of business leaders, which exists to promote the economic growth of Florida and improve the economic well-being and quality of life of its citizenry.  Representing more than 100 companies and more than a half a million employees, Council members have achieved a high degree of success and recognition in their business or profession; have demonstrated involvement in Florida public policy issues; and possess the personal qualities of character, personality, and leadership ability.

What are your summer plans? Camp Sol Taplin at the MARJCC Is preparing for a spectacular and safe summer 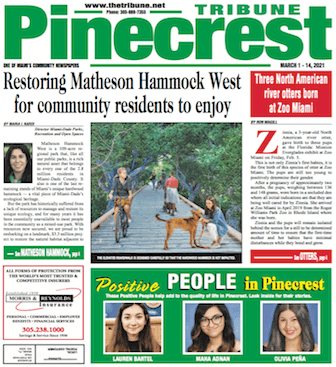 Aventura Featured Community News Releases - March 8, 2021
Amy Rosen has been named Executive Sales Director for Vi at Aventura. A sales and marketing leader in the senior living industry with more...

Aventura Featured Community News Releases - March 8, 2021
It’s just exhilarating, isn’t it, to be outside as the sun is just rising and the cool mist is being replaced by the Florida...