“It’s not what you look at that matters. It’s what you see.”

Henry David Thoreau could have been writing about West Matheson Hammock Park, rather than Walden Pond.

When people look at West Matheson, some see a passive nature park, some see a place where dogs and their owners can socialize. While others see a battlefield, wherein no compromise is possible.

I see a beautiful park that needs some attention. But I need to set the record straight about a few things.

In the 167 days since my installation as your County Commissioner, I have sponsored or cosponsored more than 90 policy items, ranging from a moratorium for new septic tanks on county owned properties to an evictions partnership with the 11th Judicial Circuit to a countywide program to make County services more inclusive. Two of those board items touched on the situation at West Matheson.

As I have said previously, my staff and I have visited the park on several occasions. We have read the advocacy both for and against the Parks Department’s plan to stop allowing cars to drive directly into the park and to improve access for all via a boardwalk built where the nature trail connects the parking lot to the interior, as well as add a two-acre dog park and restoring the abandoned botanical preserve.

As a new Commissioner who has inherited the proposed master plan for West Matheson from the last administration, I heard the argument that the Parks plan is not environmentally sensitive enough, and the claim that the County is spending millions of dollars to make a handful of people happy at the expense of hundreds.

The folks who didn’t like the plan asked me to hit the pause button.

Then I did my homework and here is what I’ve learned:

With this new information, I sponsored two proposals to discuss at Commission committees. One to formalize the Parks Department’s policy of restricting access to large regional parks to main roads rather than neighborhood roads. After hearing from both residents and my colleagues, I have decided to withdraw that proposal because it is not necessary.

The second item which comes before the full Board of County Commissioners this month asks the administration to look at how the County manages EEL lands when they are inside and/or adjacent to parks. The legislation asks DERM to investigate the issue and provide a report with recommendations and best practices.

So, despite the myriad of allegations, the reality is that I am not telling residents what should happen at West Matheson. Rather, I am asking DERM what should happen, based on their knowledge and environmental preservation framework.

When it comes to Matheson, I do want to know if DERM believes the boardwalk and other aspects of the Parks plan would be harmful or helpful to the EEL portions of the park. If so, we need to rethink some of those things.

I appreciate the perspective of the residents who want their routine to stay the same, as well as that of the Parks department, which wants to restore and improve elements of the park. What I’m trying to do is make sure the County is truly considering whether the current plan considers all the issues raised and honors the promises made to all Miami-Dade County voters over 30 years ago.

Once DERM has provided its report then we can work together with Parks and residents on a path forward. There will be public meetings once there is something to report that is different than the current plan.  Till then my team and I will continue working on our district wide projects which include Chapman Field and additions to Chapman Dog Park.

Hopefully, in the end when we look at West Matheson Park we will all see a beautiful environmentally fragile park that should be enjoyed by current and future generations of Miami-Dade County residents. 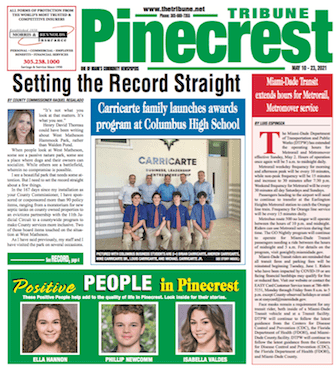