Hayduk is an elite athlete, playing in USTA tournaments at least once a month.

She began playing when she was three but didn’t really get into the game until she was seven or eight. Currently she’s in the top 20 in Florida.

But her passion for tennis could have killed her because she had a rare heart condition called Wolff–Parkinson–White syndrome.

“I had an extra electrical pathway to my heart,” she says. “I didn’t know this for a very long time, my heart could get to 300 beats. We didn’t know I had this until I was 13 years old and I went into surgery for appendicitis.”

The anesthesiologist looking at the EKG machine saw the rapid heart rate.

“I remember waking up in the ICU and having all these monitors all over me,” Hayduk says.

She had to stop playing and practicing tennis until she had heart surgery. She bounced back quickly after her surgery and was quickly back on the court.

She’s been on the Palmetto tennis team since her freshman year. As a sophomore she helped lead the team to the state championship title and advanced to the championship match in doubles.

Last year they lost the regional finals by a single point to the team that went on to win the state title.

She is hopeful for the upcoming season.

“We should be pretty good. We’re still trying to figure out where everyone will play,” she says.

Next year, Hayduk will continue her tennis career in college. She’ll play Division I tennis at Samford University in Birmingham, Alabama.

She plans to major in journalism or mass communications.

“I’m minoring in sports media,” she says. “I’m trying to work in sports film. I would love to produce for ESPN.”

Elite athletes don’t usually have time for volunteering but Hayduk has earned more than a thousand community service hours. She’s a mentor for the younger children where she trains. And she works to help other athletes become aware of the problem of hidden heart conditions and have their hearts checked through her organization Ally’s Cardiac Education, or ACE.

“I don’t want this to have to happen to anyone,” she says.

She goes to tennis centers to talk about the problem and she promotes awareness through her Instagram account.

Hayduk donates tennis wear and athletic equipment to athletes who can’t afford their own.

“I’m sponsored by Wilson so a lot of gear that I don’t need I try to donate,” she says.

At Palmetto, she is in the television production class.

“I’m more behind the scenes. I do a lot of film editing and camera work,” she says. “We get assigned a lot of our work. But the majority that we do is public service. What’s going on around Palmetto.”

She’s a member of the National Honor Society and the psychology honor society as well as captain of the tennis team.

Hayduk is the Community Outreach chair of the Forensics Club. The club works with the FBI’s Citizen’s Academy to create a better relationship between law enforcement and underprivileged children.

“It’s a partnership with the FBI. We incorporate agents to educate the kids,” she says.

The club conducts toy drives for the children.

The toys have been donated to children at R.R. Moton and Colonial Drive Elementary. 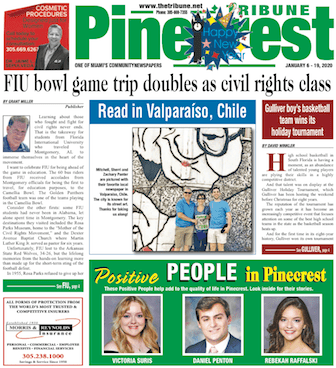