Being a football team manager has been fascinating for Palmer Trinity School senior Madison Haggard. It’s opened a new possibility for a future career.

Haggard has always been into sports, as has her family. She ran cross country from sixth grade through her junior year, and she ran track for a few years. She still plays lacrosse for the school.

This year, instead of continuing to run, she decided to try something new.

“I needed a change. I really wanted to be the varsity football team manager instead,” she says. “Football has always been a huge part of my life so it felt right to become the team manager and trainer.”

She was the varsity boys’ basketball team manager last school year so she already knew the skills and time needed for the role.

As a manager, she goes to all the football team practices and games.

“We work hand in hand with the athletic trainer,” she says. “We’re the water girls. We also go onto the field, control the equipment and assist anyone who is injured.”

She found that she likes being a manager.

“Hopefully I’ll be able to do this in college,” she says.

She’s one of four managers, all friends and a friend’s sister.

After football season, Haggard will go on to play lacrosse for the Palmer Trinity team.

Haggard got into flag football after trying out for cheerleading in first grade and finding that was not the sport for her. She played at Alexander Montessori through elementary school and continued through the Ryan Football program, playing on both a co-ed team and an all-girls team. Her co-ed team qualified for the NFL flag national championships in Dallas and Phoenix.

At Palmer Trinity, she is a Student Ambassador, so she gives tours to prospective students and their families.

“We follow-up with alumni and get them involved with the senior class,” she says. “As seniors we have the opportunity to do an internship with one of the alumni.”

Those internships take place in the second semester. The alumni association is working on a number of events before the internship fair takes place, including tailgating at sporting events.

Haggard is a member of PTS Cares, a community service organization that fundraises for local charities. They recently had an event to raise money for Bahamas relief following the devastation brought by Hurricane Dorian.

She’s a member of the Spanish Honor Society.

“We host bake sales,” she says. “We donate to local Miami communities and we also donate to Latin American counties. And Nicaragua.”

During the week-long trip, they donated clothes to the families and they built a house for a family in need.

“It was an amazing way to help out,” she says. “We visited a school. We taught some kids English. I’m so sad I couldn’t go last year or even this year. It was a once in the lifetime experience.”

The trip was impactful for her.

“It shows you how grateful we need to be every single day,” she says.

She’s aware of the contrast between her life and the children in Nicaragua.

“I go to an amazing school and to get to go to Scotland,” she says.

Outside of school, she raises money and volunteers in the community through the service club, Twenty Little Working Girls.

Haggard’s college list includes Tulane, Florida State and Wake Forest. She hopes to major in the sciences with sports medicine as a career possibility.

Mercy Hospital recognized as a 2020 Guardian of Excellence Award winner 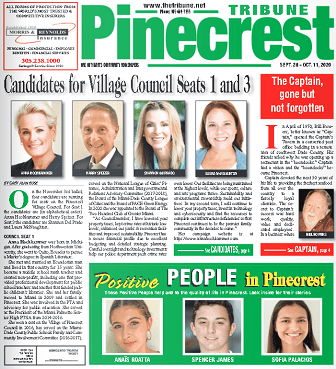