Justin Menendez’s family was devastated when his 13-year-old brother Jason committed suicide a few years ago. Menendez created the JAM Foundation in honor of his brother and set out to alert teens and their friends about the teen suicide crisis.

Some of those suicides were by kids as young as 12. It frightened him that those numbers were so high in just the first six months of the year.

Now a student at FIU, Menendez goes to area high schools to speak to students about the problem of teen suicides.

“As of now, we have five that are already in contact with us and want us to have a presentation at that school,” he said.

For far too long, suicide was a taboo subject, but Menendez wants to bring it out into the light.

The purpose of the talks is to teach the kids the warning signs.

“If two kids can relate to what I’m saying, then I’ve done my job and everything is perfect,” Menendez said.

His courage in coming forward and sharing his pain with fellow students in assemblies earned him a Silver Knight nomination from Archbishop Coleman Carroll High School.

He said depression is the leading mental illness that leads to suicide, although it’s not the only one.

“The Stand Up and Speak campaign I started is helping,” Menendez said. “Even if you stand up and speak for the kid who walks the hall by himself. You can be a nondepressed student and feel lonely. Depression is the most common mental illness.”

Gay and lesbian teens are at risk for suicide. Menendez said he has talked to a few who told him his talk helped them.

“I’ve spoken to many of them. That’s definitely another huge thing. They are taking their lives because of their sexual orientation, which is absolutely terrible.”

So far in 2012 he and Carricarte have spoken at eight schools and to some 3,500 students. Next school year he would like to branch out and speak to schools outside of Miami-Dade.

“I hope to do this for the rest of my life,”Menendez said. “It’s not easy balancing fulltime student work and the organization but it’s worth it.”

Menendez was scheduled to participate in the Out of the Darkness Community Walk sponsored by Stand Up and Speak, a project of the JAM Foundation, on Nov. 11 at the University of Miami. 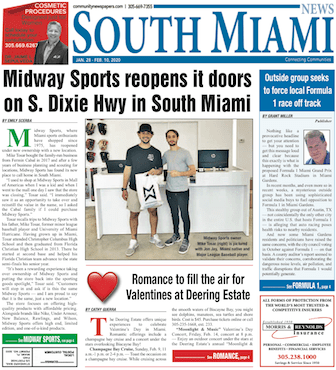 Kendall Ron Magill, Private Citizen - January 28, 2020
Amid the tragic news coming out of Australia due to the catastrophic fires that have caused great harm and death to many thousands of...