South Miami is becoming a healthcare hub. The small office building next to the hotel, formally known as Hotel Vila on SW 73 St and SW 59 Ave., is no more, as the heavy duty equipment reduced it to rubble a week or so ago. Soon to rise from the ashes will be a medical office building which will house doctors who specialize in treating folks with cancer. The vacant property immediately to the west will also be part of the complex.

Once again, the city commission has delayed making any real progress on the pool and the city is now once again in jeopardy of losing the $1.2 million county-give-awaymoney. In the past county officials, for some reason, keep giving the city a pass on meeting its deadlines to start the pool. Dick Ward, who has been advocating for the pool since at least 1972, is confident that the county will once again give the city more time to get its rear end in gear and get the pool done. As of now, the pool is supposed to get started in January, yes 2014, and get it done by August 2014, I presume.

Emails galore! The company that has the option to purchase Cal Rosenbaum property on Sunset Drive and SW 61 Ave., won big time in court and is getting just loads of emails from lots of city officials, and interesting enough also from Planning Board member Yvonne Beckman. Metro South Senior Citizen Apartments, whose parent company builds low-income apartments, sued the city alleging lots of things connected to poor people and disabled folks. The Company wants to and maybe still wants to put up a 91 unit low income apartments for senior citizens. And yes, the developer is sure to get a good look into the mindset of folks at city hall once they get those emails.

The election for the esteemed positions of mayor and two commission seats are coming up February 2014 and the voters of the City of Pleasant Living will, once again, be able to keep things status quo or make some changes. If the voters are unhappy with the ways things are in South Miami, then they can keep the present elected officials and if the voters are not happy, they can put in new folks that just might make things better. It’s that simple. Carp Diem!

On my lunch rounds: Ran into Mel Mann and Howard Schneider at Big Cheese. Both of them are looking almost svelte, not quite, but both have trimmed up quite a bit and are really watching what they eat. Yes, even at Big Cheese.

Horace Feliu was spotted over at Rok Burger on SW 73 St. with a bunch of his buddies, having a great time chowing down on some burgers and fries. Seems as though he was actually very serious about his agenda and quickly honed in on his plan for running for mayor of this fine city of ours.

When I asked him to share his plan with me, he just smiled and said “Miller, not a chance!”

And speaking of eating: Couldn’t help, but see Wayne Brackin, over at Town Kitchen the other Sunday. Seemed to be enjoying himself, it was just him, his iPad, his cell phone and his favorite newspaper. Nearby were none other than Jeff Loren and Lee Stephens who are scouting around looking for medical offices to buy.

The Doctors office on the south side of Sunset Drive and US1 will be no more in about 15 months, according to real estate gurus around town. The eye clinic will be moving out about then and I assume that they will be moving, to the yet to be built, offices less than 1/2 mile due north.

Candidates and those considering running for office can learn the rules and regulations of electioneering by attending the next Campaign Skills Seminar sponsored by the Miami-Dade Commission on Ethics and Public Trust. In addition to politicians, campaign managers, treasurers, volunteers and anyone interested in learning what it takes to run a clean campaign, are encouraged to attend. The twohour seminar takes place from 6:30 to 8:30 p.m. on Monday, July 22, 2013, in the Miami Beach Commission Chambers. Speakers — including representatives from the Ethics Commission and the Elections Department — will provide essential information on election law and procedures, fundraising and record keeping. The event is free and open to the public. Attorneys can earn Continuing Legal Education credits from the Florida Bar. Campaign Skills Seminar, Monday, July 22, 2013, 6:30 p.m., Miami Beach City Commission Chambers, 1700 Convention Center Drive, 3rd Floor, Miami Beach, Florida 33139. For information or to reserve a seat, call Robert Thompson at 305-350-0630 or email robthom@miamidade.gov. (This item was provided by watchdogreport.net)

Thought of the Day: 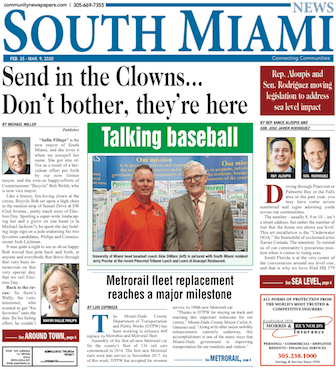 Kendall Bill Kress - February 26, 2020
From Key West to Naples and from all across Miami-Dade County, nearly 600 Floridians recently came out to attend what was billed as a...