When William “Bill” Enright III died on June 8 of a rare cancer of connective tissues called liposarcoma, the 70-year-old left behind a legacy of healthcare development in Miami.

Having spent 35 years with Baptist Health South Florida, one of his biggest achievements, according to The Miami Herald came in 1998. That year, Enright helped lead a $14-million expansion of South Miami Hospital, including the construction of its 70,000-squre-foot South Miami Medical Arts Building.

Three years earlier, he worked with Brian Keeley, Wayne Brackin and hospital boards on the landmark merger between South Miami Hospital, Homestead Hospital, and Baptist Hospital that formed Baptist Health South Florida. It was then that Enright secured leases and office space for doctors and managed land acquisitions for Baptist Health Urgent Care Centers, of which there are now 18 throughout Miami-Dade and Broward Counties.

Friends and colleagues say it was Enright’s warm personality, attention to detail, and ability to foster good relationships with municipalities that made him such an efficient leader.

“Bill was one of the first people that truly made the bridge between the local government entities such as the cities of South Miami, Homestead, Pinecrest, and the hospitals,” said Wayne Brackin, executive vice president and COO at Baptist Health South Florida. “He really humanized a big institution like South Miami Hospital to the community – and to the local political structure. He was well-known in all the city halls.”

Born on July 17, 1946, in Roselle Park, N.J., Enright moved to Coral Gables in 1953 when his father, William Enright Jr., opened an Eastern Airlines office in Miami. The Herald went on to report that after graduating from Miami Palmetto High School in 1964, he attended the University of Miami, where he earned his marketing degree. He began working for South Miami Hospital in the early 1970s.

Much of the original planning and development that went into South Miami Hospital’s growth is attributable largely to Enright’s efforts, Brackin noted.

“Bill led the strategic planning and developed the hospital district that was eventually created which allowed for the hospital to expand within those boundaries,” Brackin continued. “He worked very closely with the architectural firm of MGE on the design and implementation of those buildings present there today.”

In 2008, Enright became president of the Rotary Club of South Miami, headquartered at American Legion Post 31, where for three years he directed local service projects, event planning, and fundraising.

“Bill was very committed to the community,” said Michael Mills, past Rotary Club president and former South Miami assistant chief of police. “He was a good friend, always professional, and a pleasure to work with.”

Enright’s last position with Baptist was as director of operations at the Medical Center at Ocean Reef. And then upon retiring, he and his wife MaryAnn Stahl helped raise funds for the Police Benevolent Association and tended to their retirement property in the Redlands.

“Bill was one of those guys who would, without hesitation, volunteer for any PBA event as needed,” wrote Steadman Stahl, Enright’s brother-in-law and PBA vice president, in the July edition of his monthly online bulletin, “Stead Says.” Stahl noted Enright also volunteered for the Police Officer Assistant Trust, Hands on Miami, Here’s Hope, and at several cancer events.

Enright leaves behind his wife and children Sarah, Will and Lisa; his grandchildren Aaron, Nicholas, Thomas and Ryan; stepchildren TJ and Kaytee; and siblings Peggy Speed and Joe and Jimmy Enright. 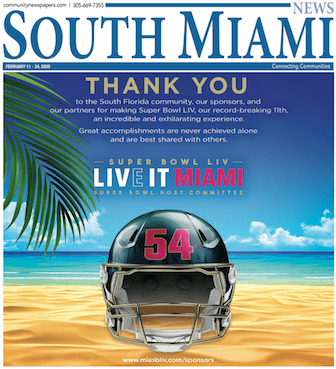