As 2015 unfolds, Tropical Audubon Society (TAS) is marking the 100th anniversary of local, organized Audubon activity in Miami-Dade County in many meaningful ways.

From environmental advocacy to providing ornithological education, TAS and its predecessors have long been on the front lines of the local conservation movement. Indeed, TAS has come to be known as “South Florida’s Voice of Conservation.”

Audubon activism here can be traced to the birth of the Coconut Grove Audubon Society (CGAS) on Apr. 16, 1915, 10 years after the infamous murder of Game Warden Guy Bradley by a plume hunter near Flamingo. Alocal and national hero who was the first Audubon-funded game warden in the Everglades, Bradley is considered the first martyr of the American environmental movement.

During the first half of the 20th Century, a few other Audubon and ornithological organizations formed in what was then called Dade County, but eventually became defunct. Even CGAS went inactive during World War II. In its wake, a group of conservation-minded men and women met on Jan. 21, 1947, to establish a new Dade chapter of Audubon, which was named Tropical Audubon Society. The last CGAS president transferred the group’s remaining funds and considerable library to the new chapter. The torch formally had been passed.

Looking back, 1947 proved to be a seminal year in the history of South Florida conservation. Along with Tropical Audubon Society’s founding, 1947 saw the publication of The Everglades: River of Grass by Marjory Stoneman Douglas and the longawaited dedication of Everglades National Park. These three milestones soon brought regional environmental struggles into sharper focus.

Throughout the second half of the 20th Century, TAS became increasingly involved in protecting the South Florida environment, particularly the Everglades and Biscayne Bay ecosystems. Significant environmental victories were achieved during this period, including the creation of Biscayne National Park (originally Biscayne National Monument), which essentially blocked the proposed SeaDade and Islandia projects, and the establishment of Big Cypress National Preserve, which laid the proposed Everglades Jetport to rest. TAS also became a founding member of the Everglades Coalition during this era.

In the 1990s, when a plan was introduced to convert Homestead Air Reserve Base, devastated by Hurricane Andrew, into an airport for commercial aviation, TAS and other environmental groups organized to defeat the proposal.

The environmental leadership role TAS had assumed during this turbulent time was made possible in part by a benefactor who looms large in local Audubon lore.

In the mid-1970s, Arden Hayes “Doc” Thomas, a TAS member and prominent South Miami pharmacist, deeded his unique house and property to the society for use as offices and nature center. Located on Sunset Drive east of Red Road in the unincorporated High Pines neighborhood, the property is in an especially convenient location, sandwiched as it is between the South Miami and south Gables business districts, and within walking distance to Metrorail. Shortly after Doc Thomas died on Dec. 31, 1975, TAS received the property and set about restoring the house. While these efforts were underway, TAS commissioned a memorial plaque in honor of Guy Bradley, installing it at the Flamingo Visitors Center in Everglades National Park and dedicating it in March 1976.

By 1977, the charming Doc Thomas House began operations as TAS headquarters. Completed in 1932, it has enjoyed Miami-Dade County Historic designation status since 1982, and in 2014 earned a coveted place on the National Register of Historic Places for its unique Rustic Style and Wood Frame vernacular architecture.

Those not yet familiar with its cozy confines should become acquainted with the historic Doc Thomas House and grounds (now known as the Steinberg Nature Center) in this centennial year of celebration.

By spreading its wings beyond ornithological programming to also encompass historic preservation and protection of the precious South Florida environment on which all our lives depend, TAS will continue to amplify its “Voice of Conservation” over the next 100 years.

Dan Jones spent more than four decades as an educator in Miami-Dade County, retiring as a principal in 1998, and subsequently consulting with the school district for the next dozen years. The longtime High Pines resident has served Tropical Audubon Society both as historian and advisor since 2013. Most recently, Jones tackled the formidable task of researching and documenting the history of Audubon presence in South Florida.

Why Miami Is Still the COVID-19 Model 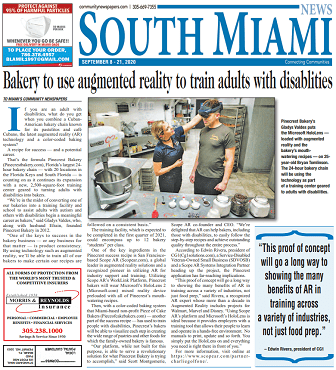