Public Works Mike Fiorey was acknowledged for the work he has done in completing the City’s History Hall. Mike Fiorey joined the City in 2004 as a temporary lifeguard then served as a City Shuttle driver and is now a valued member of the Public Works team.

Joel Grunzweig is a team member of the Public Works and Pelican Community Park staff. He helped restore and display the Pelican from the Driftwood Hotel who is now at home at Pelican Community Park. His artistic craftsmanship has enhanced many of the city’s special events throughout the year from the Booogie by the Beach to the upcoming Egg Scramble. He is a talented artist and streetscape illustrator. He was also the 2010 SIB Jazz Fest Poster Artist.

Mike Tribby joined the City in 2005. His expert media services enhance the SIB TV Channel 77. Mike is the city’s videographer and photographer. His camera lens has captured many of the photographs you see in the SIB Sun, CHS Catalogue of Events, and other city periodicals. No matter day or night, Mike is on hand at events either taking pictures or filming the event for SIB TV.

We congratulate these three employees for their accomplishments in their respective fields.

The City Commission Recognition Awards will be given in February, April, July and October of each year. The award recipients will be acknowledged at a City Commission Meeting, receive a certificate of appreciation and check for $100, employees will also be recognized at an employee luncheon in January of the following year.

The City Commission selects the award recipients but they welcome and encourage staff input. Staff members may submit employee nominations to the Human Resources Department. The next awards will be given at the April SIB City Commission Meeting.

Healthy start coalition of miami-dade responds to the covid-19 pandemic by supplying masks to all doctors, nurses, and midwives who serve pregnant women 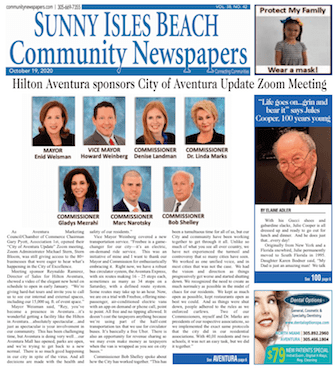