So what if a group of local folks have a beef against a developer. Seems they always get their way anyhow.

Not this time, however, if dozens of angry residents and property owners in Sunny Isles Beach succeed in nipping a City Commission plan in the bud that would effectively permit developers to construct 6,000 hotel units and 1,000 residential units within a tight two-block radius.

Not only is the proposed plan upsetting residents and affected property owners in Sunny Isles Beach, a coastal community which many residents believe is already overdeveloped, they say the plan will be a death blow to their quality of life.

To the many residents here who can do simple math, 6,000 more hotel units alone will bring over 12,000 transient hotel visitors and intense traffic to an already overcrowded barrier island.

“It’s totally insane,” says Raanan Katz, owner of several large shopping centers in Sunny Isles Beach. “In fact, it’s as blueprint for destruction of the quality of life for residents and will destroy the businesses of the tenants located at my shopping center (at Collins and 168 St.), because these visitors will cause intense traffic and end up parking in my shopping center.”

Despite strong opposition by residents and affected property owners, the SIB City Commission led by termed-out Mayor Bud Scholl is planning to revise the city’s Comprehensive Plan at public hearing scheduled on July 18 at 6:30 p.m. at City Hall to permit developers to build more than 6,000 hotel units and 1,000 residential units in the area called the “Town Center District.”

The district is located on the west side of Collins Ave. and bordered on the south by Sunny Isles Blvd. and on the north by 172 St.

Many residents are also upset that Mayor Scholl and the members of the City Commission are essentially breaking campaign promises to prevent construction of high-rise buildings on the west side of Collins.

“The residents of our district need a mayor and commission that understand the massive challenges we have and who are willing to protect residents from more density on the west side,” said Maggie Gordo, president of Sands Pointe Ocean Resort Condominium, in an email (in the public record) sent to Mayor Scholl and the Commissioners.

“Now more than ever, our elected officials have to stand with their constituents who are suffering from over development of our beloved city,” she continued.

Also spelled out in the public record is apparent support by the commission on the side of developers. The plan to increase the development intensity in the Town Center District was initiated after property owners and residents raised strong objection to a proposed development called the Infinity Project at a public hearing on December 20, 2018.

This project would place 120 residential units, 220 hotel units, 22,560-square-feet of retail space, and almost 700 parking spaces on a small lot on the west side of Collins Ave. that is currently being used by the Newport Hotel as required parking for the hotel.

This project is located at Collins Avenue and westbound 826 West – considered by many as the busiest and most dangerous intersection in the city. In a video of the December 20 public hearing, Mayor Scholl was visibly upset when the majority of the city commission deferred a decision on the Infinity Project site-plan application.

After the hearing for the Infinity Project, many residents stated they feel Mayor Scholl is acting the part a proxy for the developer, primarily due to his continued push for the approval of the project despite strong opposition from residents – and even after being informed by a planning expert hired by Katz that the Infinity Project was illegal under the land use law of the city.

Because the Infinity Project cannot be approved under the current land-use law, the mayor and commissioners are now seeking to change the law contrary to the vision of the founding members of the City of Sunny Isles Beach.

“This plan to increase the development density and intensity on the west side of Collins is unacceptable to residents, especially where our streets and school are overcrowded. During my tenure as mayor, we kept our promises to the residents.”

It appears Mayor Scholl and city commissioners wish to leave a different legacy than that of former elected officials regarding the west side of Collins Avenue.

Ironically, Katz, who owns the most properties on the west side of Collins, is opposing the overdevelopment here even though he could stand to make millions of dollars under the proposed plan to increase development intensity on his properties.

“You learn from experience,” Katz continued. “And my experience tells me that over-development on the west side of Collins Avenue will be highly detrimental. I am always on the side of residents, not a fly-by-night developer who is seeking only to destroy our city.”

The State of Florida may also be on the side of the residents, seeing that the state rejected a similar plan to increase development density in the Town Center District in 2007.

Leave a Reply to Antoinette B. Fischer Cancel reply 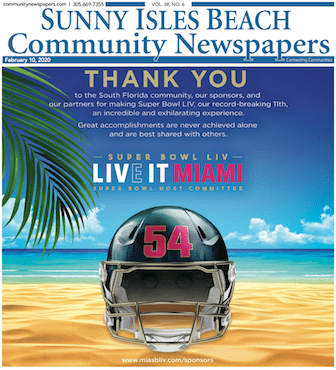