As you may already be aware, our long time Chief, Fred Maas, has announced his plans to retire before the end of this year. Consequently, after 14 years, the City of Sunny Isles Beach has to create a process to select a new Chief of Police. It is important to note that under the City Charter the City Manager is responsible for hiring the new Police Chief. The Charter prohibits the City Commission from hiring the Chief of Police. Members of the City Commission, however, can express to the City Manager their interest to hire a Chief who is a good fit for our community.

It is undisputed that it will be very hard for anyone to fill Chief Maas’ shoes. We all know how big they are and he was truly a good fit for our community. For that reason, we are committed to using an open and clearly defined process that insures everyone an equal opportunity to be selected for the position. Upon receiving notice from Chief Maas of his intent to retire several weeks ago, City Manager Rick Conner retained a nationally recognized Florida based executive search firm by the name of Colin Baenziger & Associates to recruit the new Police Chief. The City Manager has authorized the firm to conduct a national search for the new Police Chief. In addition to working with the search firm, the City Manager will utilize the expertise of Chief Maas in reviewing potential candidates for position of Police Chief.

I am pleased to inform you that the City has received more than 25 applicants since the executive search firm advertised the position of Police Chief of the City of Sunny Isles Beach. The deadline for applications was October 23, 2010. I certainly believe that we will have a number of highly qualified applicants for the position because the City has always been known for its outstanding law enforcement operations. The City Commission has always been extremely supportive and generous to the Police Department.

After the application deadline, the next step in the process is to reduce the number of applicants into a final list which will include approximately five candidates for further interviews. The final list will be created based on the qualifications of candidates, education, high ethical standards, and peer review. Please be assured that the City will conduct a thorough and detailed background check on each of the candidates. 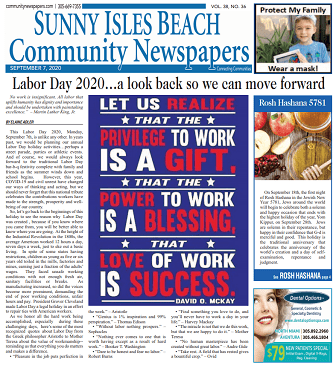