Just as the Pilgrims set foot in the New World on December 11, 1620, pioneers dedicated to taking control of their own destiny and forging the City of Sunny Isles Beach accomplished their goal on June 16, 1997 and ever since, there has been much to be thankful for.

One of the most proactive chapters in the Sunny Isles Beach “Thanksgiving Story” dates back to the early 1990’s when Miami-Dade County still ruled and citizens subject to paying property taxes were not reaping the rewards associated with living in their own city.

A group of people rallying for incorporation, known as “Concerned Citizens of Northeast Dade” were led by civic activists including the late Mayor David Samson. Brave and persistent, they made a pilgrimage downtown and secured support from a strong ally – Sen. Gwen Margolis.

After freedom fighters formed a Charter Commission and drafted a Charter there was a landslide vote in favor of incorporation and the City of Sunny Isles Beach was officially born. But this was just the start of greater things to come. In 1997, newly elected members of the City Commission began the challenging task of transforming a declining tourist destination into a vibrant, progressive city.

‘A NEW WORLD OF DIFFERENCE’

One of the first promises kept by the City Commission was the formation of a first-class Police Department. Thanks to a tribe of officers known as “the best in blue,” criminals behaving like wild Indians no longer posed a great threat to peace and security; state-of-theart patrol cars could ride like the wind to respond to calls; and a philosophy of community policing prevailed.

With motorcycles, all terrain vehicles, jet skis and boats, vigilant patrols were always looking out for the welfare of citizens. Positive changes were happening fast…the only thing slowing down was traffic on Collins Avenue and around interior neighborhoods welcoming reduced speed limits.

From the startup of a convenient shuttle bus service – to the creation of a Cultural and Human Services Department planning trips, concerts and special events for the whole community to enjoy, the wheels of progress continued to turn.

Like emerging colonies, distinct city departments were also established – each with a proactive mission based on promoting the highest quality of life, working in conjunction with the City Manager. Public Works started cleaning up the streets and removing overgrown brush. Code Enforcement encouraged citizens to be law abiding and promote an upscale image.

The Building Department recruited a team of expert officials and inspectors. The Finance Department helped draft feasible budgets; highly qualified zoning and community development experts were charged with promoting optimal development. An Administrative Services Department was created to keep things running smoothly. And a Cultural and Human Services was established to plan enriching, entertaining “community unity” events for residents of all ages to enjoy.

‘PLANNING FOR THE FUTURE’

Pioneers of progress were called into action once again when a Citizens’ Planning Advisory Committee was formed to help draft a Comprehensive Plan shaping the future of development in Sunny Isles Beach. Working late into the night in Commission chambers (formerly located in an RK Shopping Center), residents, business and community leaders discussed pivotal issues such as beach access and zoning codes designed to foster optimal development along Collins Avenue and Sunny Isles Boulevard.

Soon, old rundown motels along the east side of Collins Avenue started to disappear and multi-million dollar developments began to rise. Relics of the past like Colonial Inn were replaced with the futuristic Pinnacle by J. Milton & Associates, The Related Group’s Ocean One…Two…Three, etc. And soon after, international publications announced the triumphant news that Donald J. Trump, the Trumps of Williams Island, Turnberry Associates and other world-famous developers such as Fortune International were landing on Sunny Isles Beach.

As property values continued to climb, taxes stayed low – but adhering to the motto “good isn’t good enough,” the City Commission voted to embark on another ambitious initiative supporting the goal to make Sunny Isles Beach the jewel of South Florida.

While residents of Golden Shores were cheering a much needed stormwater drainage and street paving project, pow wows were being held and the City Commission ultimately voted for a “feast your eyes on this” comprehensive capital improvement plan benefiting the entire city.

In keeping with the pioneer spirit, a Mayor’s Advisory Council was also formed so residents could provide input to the City Commission while volunteering to serve on committees relating to issues such as traffic, education/schools and long range planning.

As the city welcomed more and more Sunny Isles Beach settlers including many families with children, the Commission realized the need for city parks and a school. Continued efforts to acquire land and grant funds helped make the dream come to fruition as park dedications ensued and the Sunny Isles Beach Community School opened in the fall of 2008.

MUCH MORE TO BE THANKFUL FOR

In 1676, the town council of Charlestown, Massachusetts officially declared a day of Thanksgiving and now in 2010, the Sunny Isles Beach City Commission has pledged to continue forging ahead with progressive initiatives.

Recently re-elected, Sunny Isles Beach Mayor Norman Edelcup has served on the City Commission since 2001; been a resident of the city since 1969; and has earned a stellar reputation in the community for being an involved citizen, successful businessman and generous philanthropist.

Following the death of the city’s first Mayor, David Samson, Edelcup, who was serving as Vice Mayor at the time, was appointed interim Mayor in 2003. Subsequently, he declared his intent to run for the mayoral seat in a special election – but since the qualifying deadline passed with no candidates opposing Edelcup, he was declared the new Mayor of Sunny Isles Beach. Civic activist Roslyn Brezin was then been appointed to fill Edelcup’s Commission seat.

Due to term limits, Brezin was not able to run in the November 2010 election. The candidate filling Brezin’s Commission Seat 4 will either be Isaac Aelion or Jeniffer Viscarra, depending on the results of a runoff election scheduled for Dec. 7. Commission Seat 2 (vacated by Gerry Goodman due to term limits) will be filled by Jeanette Gatto as of Dec. 2. 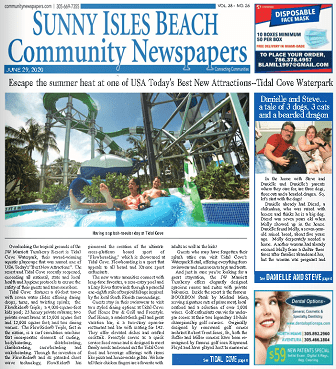