As we prepare for a long weekend, it might be appropriate to take just a moment to think about the significance of Dr. Martin Luther King Day- for it is far more than a parade or community festival. Taking place each year on the third Monday in January, MLK Day is the only federal holiday observed as a national day of service “ a day on, not a day off.” Dr. King said, “Everybody can be great because anybody can serve.”

The inspiration of Dr. King and the civil rights movement led our nation and the Federal government to a new standard of equality and inclusion, which was Dr. King’s purpose- – for his commitment to equal rights, non-violence, and social change. He wanted to challenge our country to be a better place, where every person is valued and respected.

Dr. King challenged us to overcome oppression and violence. He urged us to reject revenge, aggression, and retaliation. His vision that “no individual be judged by the color of their skin but by the content of their character,” set in motion changes that led to the passage of civil rights and voting laws. In honor and respect for his contribution to the improvement of our national attitudes, policies, and laws, we celebrate Dr. King.

Over the years, there has been some speculation on what Dr. King could have accomplished if his life had not been so tragically cut short. He was only 28 years old when he was elected the first President of the Southern Christian Leadership Council. He had already graduated from college at 19 and graduated from Divinity school at 22. By the time Dr. King was 29, he had published his first book, “Stride Toward Freedom.” In 1964, he gave his famous “I Have A Dream” speech to 250,000 people who marched on Washington in support of pending civil rights legislation. In the same year, he was successful in getting the legislation passed and he won the Nobel Peace Prize. A lot of accomplishments for a man who was only 35 years old.

Dr. Martin Luther King believed in our country and its potential for greatness. He also believed that each one of us is essential to achieving its full potential. Although Dr. King’s primary efforts focused on equality for African-Americans, his ultimate goal was the equality and inclusion of every individual. As Dr. King said “There is nothing more dangerous than to build a society, with a large segment of people in that society who feel that they have no stake in it; who feel that they have nothing to lose. People who have a stake in their society protect that society. But when they don’t have it, they unconsciously want to destroy it.”

Decades after his death, Dr. King’s message of love continues to reach beyond the Civil Rights Movement. It has become a message of love, inclusion, and peace.

MLK weekend gives us all another opportunity to reaffirm and reflect on our appreciation for the uniqueness that each individual brings to the City of West Park. So, on this holiday of celebrating Dr. King ask yourself how are you contributing to uplifting people and their consciousness in the understanding that we are all here to help and to love one another? For by doing this, we not only honor Dr. Martin Luther King Jr. and his legacy- we honor ourselves and future generations.

Remember to contact me at City Hall with your ideas, suggestions or concerns. I represent you and appreciate your input into the continued success of our beloved city. I can be reached at (954) 329-8990 or via email at: fbrunson@cityofwestpark.org.

To the Citizens of Miami Beach 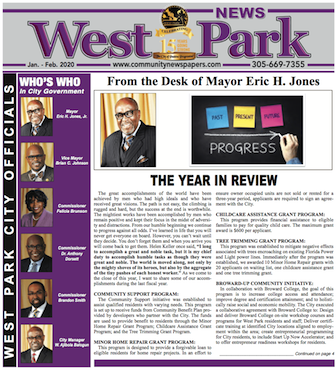 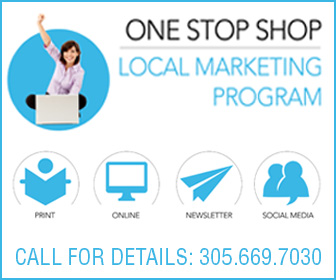