Growing up in a solar powered home, Palmer Trinity School junior Owen Reynolds learned the value of creating energy from the sun at an early age.

As a fourth generation South Floridian, today he is concerned about the region’s fragile future being threatened by rising sea levels from climate change and a finite fresh water supply.

Believing that creating sustainable energy to power our future is critical to places like South Florida — where the prospect of even having a future is in doubt — Reynolds recently created “The Apollo Project,” an initiative that introduced a student-built solar-powered race car at Palmer Trinity’s 19th annual International Festival.

“In 1931, Thomas Edison was quoted as saying, ‘I’d put my money on the sun and solar energy. What a source of power!’ Now, nearly 100 years later, it makes more sense than ever that we capture this free, clean, abundant natural resource in every place and in every way possible,” Reynolds said.

“The idea of The Apollo Project is that there is a better way — a clean and sustainable way — to power our future. It is my hope that this car will inspire others to learn about solar power, which will in turn expand its viability all over The Sunshine State, our country, and the world.”

Aptly named “The Chariot,” The Apollo Project’s car got rave reviews at its debut as the latest and largest creation of Palmer Trinity’s Makerspaces, which include the middle school’s “Innovation Station,” the high school’s “Forge,” and a solar-powered complex called “The Garage” where the car was designed and built.

The Chariot is powered by state-of-the-art ultra-thin, flexible, solar panels that cover its slopping, stylish hood and roof to generate 900 watts of power from the sun.

According to Innovation coordinator Brian Diaz, who oversees Palmer Trinity’s Makerspaces, “The interest by students and faculty in our maker facilities has been nothing short of amazing. The Apollo Project is a perfect example of that enthusiasm and our students’ creativity.”

A school makerspace is a place where young people have an opportunity to explore their own interests; learn to use tools and materials, both physical and virtual; and develop creative projects.

Following its appearance at the Mar. 31 Deering Estate Seafood Festival, The Apollo Project car will race in the 2019 Sunchase Challenge at Florida Gulf Coast University in Naples on Apr. 6. Later that month, look for

The Chariot at Palmer’s Earth Day Celebration on Apr. 22.

The car will then go on the road for a series of appearances at local schools during which the team will share with students how it was created and built, along with information about the importance of solar power and sustainability.

“This project has been so rewarding for everyone involved, thanks to the inspired and engaged students on my truly excellent team, including designers, fabricators, programmers, race drivers, and pit crew, along with the remarkable support of Head of School Mr. Roberts and Mr. Diaz, who has been incredible to work with,” Reynolds said.

“I believe the sky’s the limit for this car’s ability to inspire others to embrace sustainability, to learn the value of solar power, and help to change our world for the better,” he added. 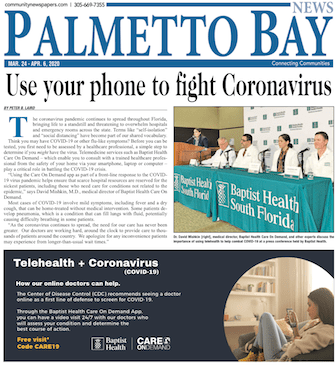