“It’s specifically targeted towards less affluent communities,” he says. In the summer going into eighth grade Yan went to Taiwan to learn Mandarin. “I wanted to apply my Chinese,” he says.

When Yan returns to Palmetto in late August, he’ll be the co-President of the Debate Club with Anna Liu. His goal is to recruit more members.

“I help teach the students about debate and organize meetings,” he says. “I’m initiating in-house competitions.”

Yan thinks students will benefit from being in debate like he has. It was a difficult year due to Covid-19 restrictions; although Palmetto did not participate in National Forensic League competitions this year, Debate Club members were able to incorporate competition activities at meetings.

“My club was heavily involved in competitions my freshman and sophomore year,” he says.

Yan wants to be able to return to the competitions if Covid-19 protocols allow for that.

Along with Debate Club, Yan is Co-President of the Asian Culture Club with Mikayla Ashe.

“This club educates members on Asian culture and fosters an environment that allows for discussions on race and beyond,” he says. “At this time of Asian hate crimes and with the current heightened levels of racism, I think it’s really important to talk about the current situations arising regarding Asians and other minorities in general.”

He says having an organization such as the Asian Culture Club is important because it brings together Asian people along with other members of the community.

“It’s important we learn about the prevalence of racism in order to prevent further issues from arising,” he says. “Asian Culture Club gives me a chance to educate others and prevent misinformation or stereotypes; it helps them become more familiar with other cultures and sheds light on issues faced by the Asian community.”

Both clubs have been helpful to him since he is the son of immigrant parents of Chinese descent.

Through the Social Studies Honor Society, he competed in History Bowl and hopes to compete again this coming year. He’s also peer educator with the Health Information Project.

“I really enjoy HIP,” he says. “At the beginning of the year, it took time to get used to the zoom format. Once we did, we got into topics such as sexual health and sexual orientation.

I think it’s very important to talk about this. Some of the kids wouldn’t take it seriously, but once they learned more about the issues, the statistics shocked them, and then they took it a lot more seriously.”

Outside of Palmetto clubs, Yan is a private piano instructor for the Pinecrest City Music Project.

“I enjoy teaching others and sharing my love of music,” he says.

Before Covid-19, Yan volunteered at Doctor’s Hospital in Coral Gables in the physical therapy branch.

“My role was to do small tasks for the patients, like filling ice packs,” he says. “I learned how physical therapy works and gained insight on a working environment.”

He was able to sit in on physical therapy sessions and he toured the hospital. 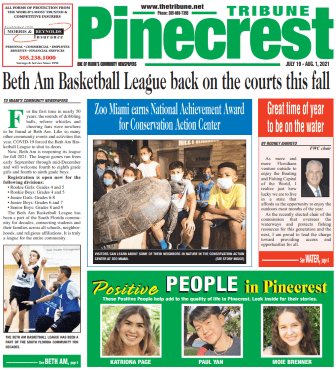